All life as we know it has to maintain homeostasis—that is, keep internal goings-on regulated. Body temperature is just one example. Mammals can maintain a stable body temperature with no trouble. Reptiles have to bask in the sun to keep warm.

You’re probably familiar with this idea. When you sweat, your body is trying to cool down. When you shiver, it’s trying to warm up. These are all examples of your own body maintaining its own homeostasis.

And then there’s blood pressure, heart rate, hormones, and pH—not that I have any real idea how all that works, but I know they’re all things that your body regulates on its own. Homeostasis is an important thing. Basically, when it fails, things go wrong.

And stars do the same thing.

In fact, stars are actually way better at maintaining their own homeostasis than we are, although when we’re talking about stars, we call it hydrostatic equilibrium. A star’s saving grace is the pressure-temperature thermostat.

I know. It’s an actual vocabulary term in astronomy textbooks, but it sounds like normal everyday speak to me. I mean, we’ve all got thermostats in our houses. They maintain—you guessed it—the homeostasis of our household climate.

But we’re getting a little ahead of ourselves. What exactly is hydrostatic equilibrium…and how do stars maintain it?

First…let’s think of stars as like onions, with layers.

Well, you’ll see what I mean in a second. But you’re right, it’s kind of a crazy analogy. Even as we compare stars to onions, we have to keep in mind that stars don’t have such distinct layers. However, it works for our purposes.

The conditions within a star change as we approach its interior. On the outside, the gas isn’t very hot. I mean, don’t get me wrong, it’s hot—it’s a star we’re talking about—but compared to the interior, the outside isn’t very hot.

The core of a star, on the other hand, is really hot.

There’s a sort of gradual buildup of heat and pressure from the outside to the inside. There aren’t distinct layers with definable boundaries. But we can think of a star as having layers like an onion. Each layer has to support the weight of all the layers above it.

So…how the heck do the inner layers support the layers above them?

Well, consider this. If you lean against a wall, why don’t you fall through it? Why is the wall able to support you?

It’s because the wall exerts pressure against you. And it’s able to do so because, like you, it’s a solid object. Water, or other liquids, wouldn’t be able to hold you—you can reach right through them. And the same goes for air and other gases.

But a star is made up entirely of gas. It doesn’t have to withstand the test of holding up a solid object. In fact, if you could stand on a star without getting burnt, you’d fall right through it.

And here’s the key: the pressure of any gas—that is, the pressure it’s able to exert on what’s around it—depends on its temperature and its density.

A hot gas expands. It’s a basic concept of physics. If a gas is hot, it means its molecules are zipping about rapidly and collision-prone, which means that they will ricochet off one another and cause the gas to expand. This exerts pressure on its surroundings.

A gas will also exert pressure if it’s dense—hence the iron weight on the other side of the seesaw. (Iron is extremely dense.) This is because density just means the molecules are crowded more closely together, and it has the same effect as if the gas were hot.

More molecules crowded into a tighter space, regardless of temperature, will ricochet off one another and drive the gas to expand—once again exerting pressure on its surroundings.

So that’s what happens inside a star. Since the inner layers have to withstand the most weight, they also have to exert the most pressure in order to support it. And that means—you guessed it—they have to be hotter.

But…what happens if those inner layers become too hot? Will the star just begin to expand until it dissipates into space, gone as if it were never there? 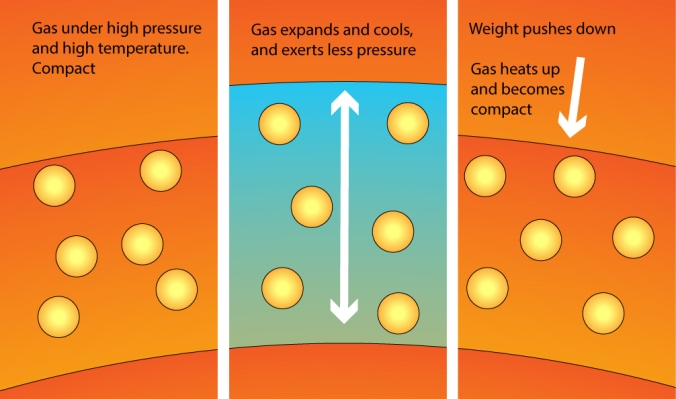 Remember what I said about how stars are really good at maintaining their own internal homeostasis? Well, another basic concept of physics is that as a gas expands due to increasing temperature, it cools down, and weight of the layers of gas above it will force it to contract.

Here’s an animation by my brilliant illustrator friend John Garrett. (He did all the other images in the post and will for the foreseeable future, too.)

In this animation, the star starts out at hydrostatic equilibrium—homeostasis for stars. The forces of pressure from both the core and the weight of the layers above, indicated here by the arrows, are matched.

But what if the nuclear fusion reactions in the core that drive the star’s temperature start happening too fast, and produce too much energy?

Well, as the animation indicates, the core will begin to expand, pushing the outer layers out a bit. However, as the core expands, particles are not crammed together as tightly and collide less often, slowing down the reactions.

The cooler core cannot support the weight of the layers above it and will contract until the star once again reaches hydrostatic equilibrium.

The concept is the same if reactions begin to proceed too slowly, producing too little energy. The core will begin to contract under the weight of the layers above, which crams the particles together more tightly, resulting in more collisions. Reactions will begin to speed up again and the star will return to hydrostatic equilibrium.

That’s the idea of the pressure-temperature thermostat. We’ll revisit this concept in the future, especially when we talk about variable stars—stars whose brightness fluctuates regularly. But for now, let’s move on to a more in-depth view of how stars produce their energy.

If you’re following this blog via WordPress, whether through the follow service or by email, I’d really appreciate it if you subscribed to my mailing list instead! Sometime in the next few years, I plan to self-host this website without the WordPress platform, and I’d really love to keep you all as an audience! You can join the mailing list by clicking here.

If you’re worried about getting duplicate content, just unsubscribe from WordPress’s services. Here’s some documentation on how to do that.