Contrary to popular belief, space is not empty. The space between the stars is filled with clouds of dust and gas. And this space—the interstellar medium—is incredibly beautiful and fascinating.

I often refer to the interstellar medium as the galaxy’s “backstage.” Why? Because it’s not the part of the universe that astronomy enthusiasts usually think about. And yet, there are whole studies devoted to studying this natural wonder of the universe.

Also, the interstellar medium is largely hidden from us. There are ways we can detect it—when light from a distant star passes through it, for example. And with our eyes, we can see nebulae, the visible evidence of this interstellar expanse.

The backstage of a theater is similar—it’s not the main part of the show, but you sometimes see evidence of it in the forms of new costumes donned as the play progresses and new props brought into play. The audience often forgets about it entirely.

Nevertheless, it’s beautiful. Stars are born out of giant molecular clouds, triggered by compression from expanding bubbles of coronal gas. The interstellar medium spells our beginning.

But how did it get there? END_OF_DOCUMENT_TOKEN_TO_BE_REPLACED

Stars are hot. Space is cold. We’re all familiar with that, right?

Technically, it’s more complicated than that. Space isn’t completely frigid—absolute zero, the temperature at which there is no heat whatsoever, is purely theoretical and not thought to exist in the universe. But it is pretty darn cold.

And stars aren’t always very hot—there is one newly discovered star that’s only as hot as fresh coffee. (It’s a brown dwarf, and if you go by the definition of a star as an object that’s ignited hydrogen fusion in its core, then it doesn’t actually count.)

As a rule, we can think of stars as being much hotter than the space in between…except in the case of coronal gas. END_OF_DOCUMENT_TOKEN_TO_BE_REPLACED 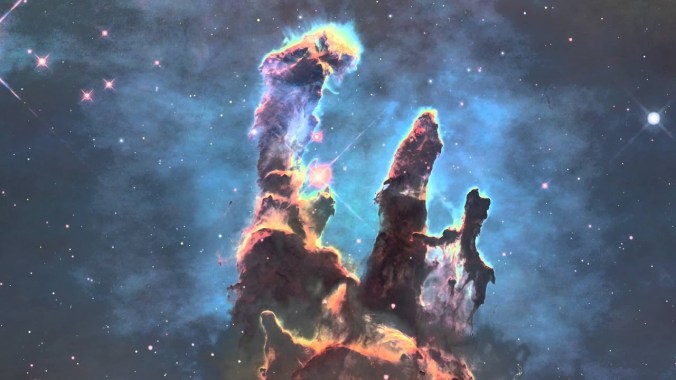 Meet the Pillars of Creation, a photograph taken by the Hubble Telescope in 1995. These apparent “pillars” of dust and gas are what we call molecular clouds. And this region of clouds in space is aptly named: it’s where stars are created.

Molecular clouds are deep within the interstellar medium. In case you don’t remember the ISM from my “recent” posts (sorry about that), it’s the stuff between the stars. It’s the galaxy’s backstage. Space is in fact not a perfect vacuum—it’s full of the ISM.

So what’s going on with molecular clouds like the Pillars of Creation? END_OF_DOCUMENT_TOKEN_TO_BE_REPLACED