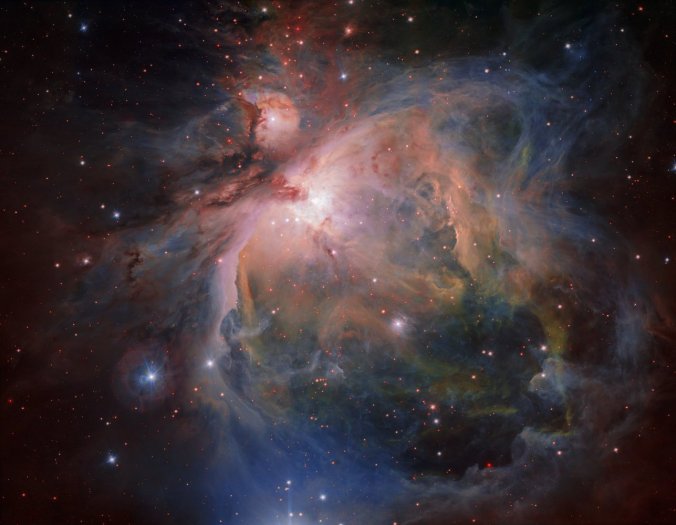 Yeah…we’re talking about the Orion Nebula again. I know, we already took a tour through the Orion constellation in my last post…but there’s still more to cover about how stars come to life, and Orion is still the best case study I know.

So…hold up a second. Contagious star formation? What’s that supposed to mean? I mean, usually, when you think about “contagion,” you think of catching diseases from others around you. So…can stars get sick?

Well, no. Stars are pretty good at maintaining their own homeostasis, something I’ll explain in a later post. By “contagious” star formation, I mean that star formation can trigger more star formation.

But how the heck does that happen?

Well, first, let’s go over how stars form in the first place. I’ve covered this before, but I think it’s worth reiterating for the sake of this post.

We start with a dense cloud of the interstellar medium, or ISM, the “stuff” between the stars. Specifically, we start with a giant molecular cloud, or GMC. It’s a vast cloud of dust and gas, completely invisible unless it’s silhouetted in front of a brighter cloud or distant stars. 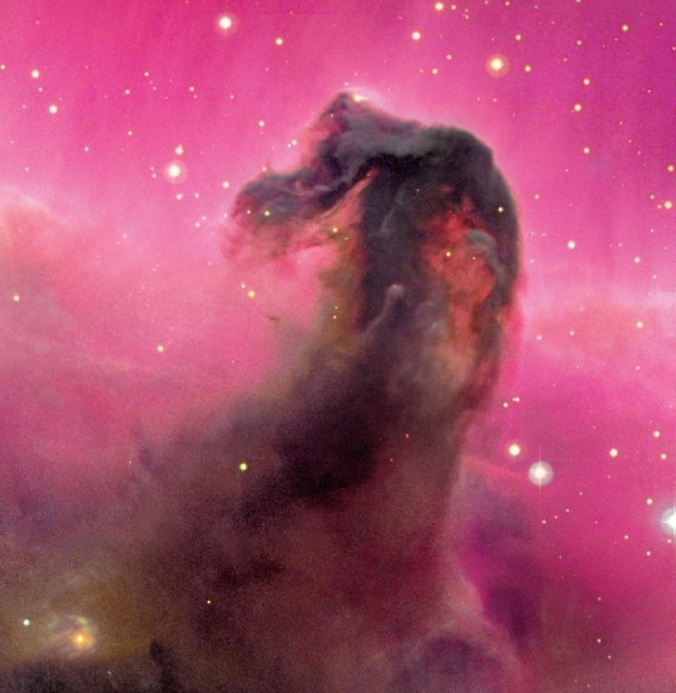 The Horsehead Nebula is one such GMC. It’s made of dense, cold dust that gives off no more of its own light than your desk would if it were ejected into space. Because it’s so dense, it’s not very transparent, so we can’t see through it very well.

The bright pink nebula beyond it could be nowhere near the Horsehead Nebula itself. It’s an emission nebula and glows pink because nearby hot stars are exciting the gas to produce its own light. The Horsehead Nebula could be silhouetted in front of it thousands of light-years away.

Here’s another example in the form of the Trifid Nebula: 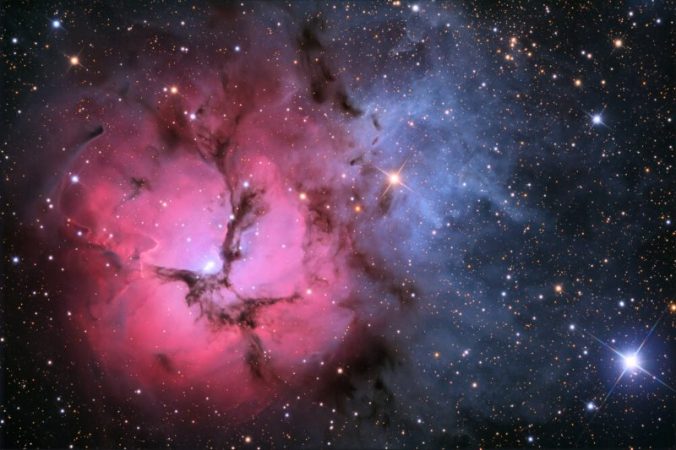 The Trifid Nebula is one of my favorites, simply because it provides an example of all three types of nebula. You’ll notice a bright pink emission nebula on the left, and the hazy blue hues of a reflection nebula on the right.

And threaded throughout the emission nebula is a dark nebula—again, dense molecular clouds that are silhouetted in the nebula’s light.

In case you’re wondering, a nebula is just a visible phenomenon. Dust and gas clouds are physical objects. But they are far larger and vaster than any nebula. A nebula is just the small region of the cloud that we can see with our eyes, and a single nebula could often refer to several different clouds that appear together in the sky, but are actually very far apart.

Anyway. What does any of this have to do with star formation?

Stars form out of the material of the ISM. When stars die, they return that material to space, where it can form new stars. 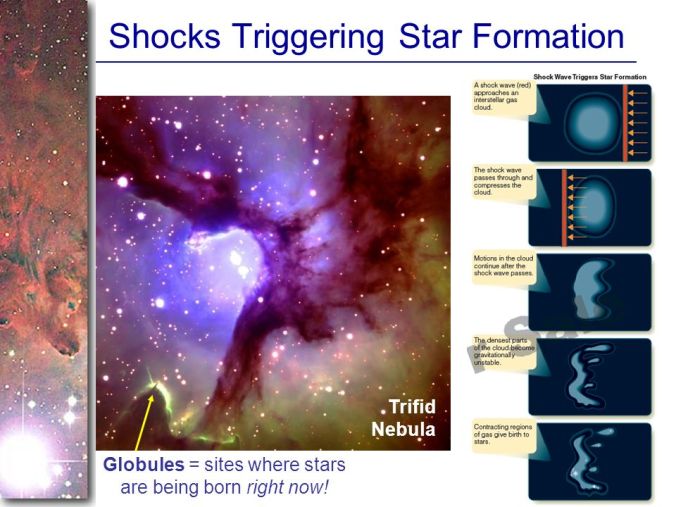 In case you didn’t recognize it immediately, this image is simply a zoomed-in view of the dark nebula threaded through the emission nebula. It’s also rotated a bit from the image I just showed you, and there’s been some color enhancement. In this image, the Trifid sure doesn’t look pink to me.

Anyway, you’ll notice that the diagram to the right describes how stars form out of the ISM. We need some kind of shock wave for the material to begin collapsing to form the core of a star.

Because most of the time, the ISM remains in balance—or, as astronomers say, in equilibrium. 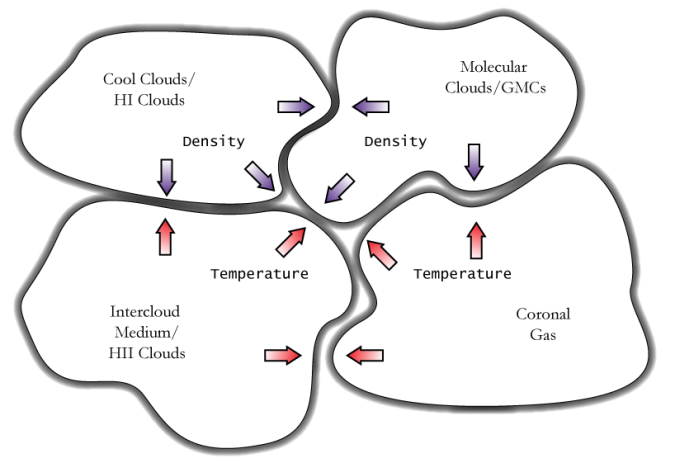 Each of the different types of clouds in the ISM tend to expand outward due to internal pressure caused by either density or temperature. The cool clouds of hydrogen gas and molecular clouds alike are dense, so they don’t need to be hot to expand. And the HII clouds and coronal gas may have extremely low densities, but their heat drives them to expand instead.

That’s a problem for star formation. But that’s what those interstellar winds are good for. When one sweeps through, it often compresses GMCs—the only clouds massive enough to form new stars—and triggers star formation.

Still…what does any of this have to do with contagious star formation?

Well…for this part, how about we get back to Orion. Not the nebula—the constellation. 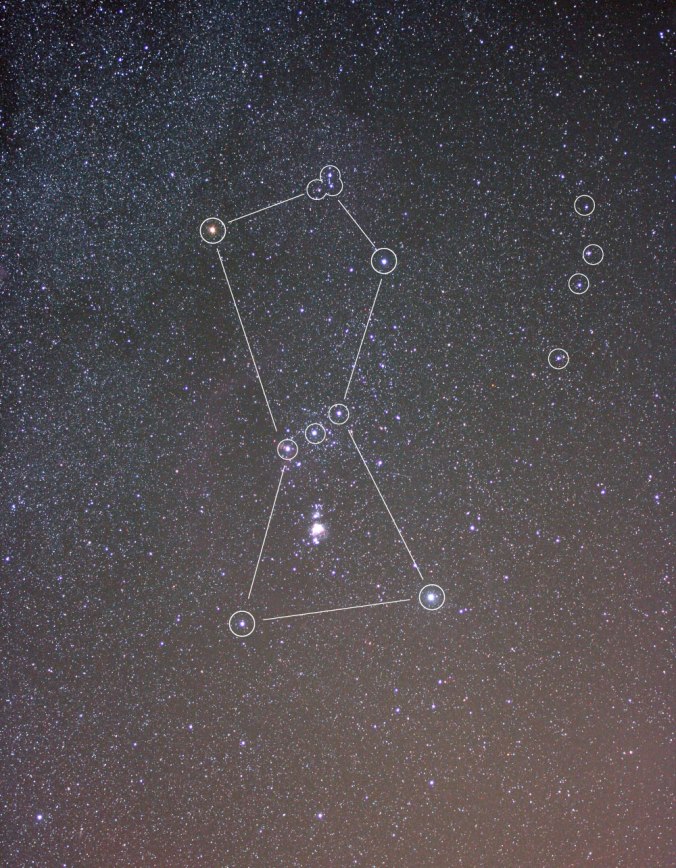 Orion is a fantastic winter constellation, easily visible overhead early in the night. It’s home to the Orion Nebula, sometimes referred to as the “Great Nebula,” a cloud of ionized gases that glows bright due to a single hot star at its center. It’s that hazy patch just below Orion’s “belt.”

The Orion Nebula is a site of active star formation. Stars are forming in the dense clouds within right now as you read this. This doesn’t mean you’ll notice it happening if you look, though. It’s like watching grass grow…except way slower.

We can calculate these stars’ luminosity—their total brightness—with great accuracy, if we can measure their apparent brightness and distance. We can also measure the masses of those that are in binary systems, and use those measurements to estimate the masses of other stars.

Once we know a star’s luminosity and estimated mass, we can figure out where it is on its life cycle, and from there we can figure out how old it is. The stars near Orion’s west shoulder are about 12 million years old.

Notice what happened there? The stars of Orion got younger as we moved south through the constellation.

Well, that’s contagious star formation for you. The stars of Orion’s west shoulder would have been much hotter when they were younger, and they would have blown the surrounding interstellar dust away.

The clouds to the south must have been triggered to collapse, forming new stars. And those stars would have done the same, pushing the dust away again and concentrating it in other regions. As the density in those concentrated regions increased, more new stars would have formed.

I often point out the Orion Nebula as a site of active star formation. And that’s true, stars are forming there right now. But I don’t always remind people that the entire constellation of Orion tells a story.

And it’s not just Orion. We can see evidence of contagious star formation all across the sky. There are countless regions we can observe where older stars clearly triggered the formation of those around them.

Now that we’ve finished talking about star formation, we can move on to the results of the process. There’s a slight gulf between star birth and the beginning of a star’s life cycle, and we’ll explore that time period next up.

2 thoughts on “What is Contagious Star Formation?”