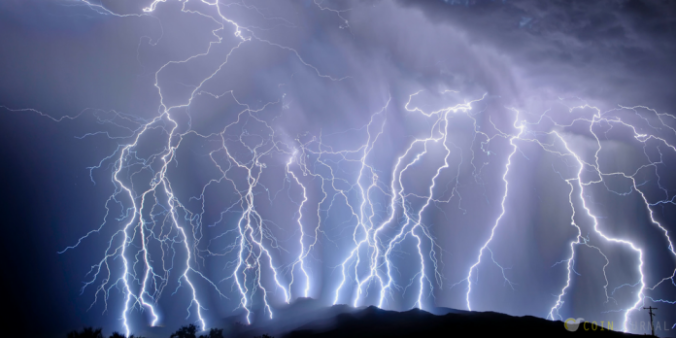 There’s a saying that “lightning strikes whatever’s tallest.” But this is only partly true. Tall objects do attract lightning bolts, but there’s a second condition for lightning to strike: electrical conductivity.

Meaning, a lightning bolt will only strike an object that can become electrically charged.

There’s another common misconception out there, though the Google search I did reveals that knowledge of the truth is comfortingly widespread. If you were to catch sight of a lightning bolt, would you say it strikes upward or downward?

That is, does lightning start at the ground or in the clouds?

I heard from multiple reliable sources that lightning strikes from the ground up, but the video you’ll see below would seem to contradict that. I wasn’t satisfied with the results of my search, so I did some more digging.

Watch these 37 seconds of slow-motion lightning footage. Try slowing the video speed down. Is the lightning striking up or down?

You know, if I’m perfectly honest, it looks like it’s striking down to me.

The National Severe Storms Laboratory (NSSL) says that lightning that strikes the ground is known as cloud-to-ground lightning, and gets its name from the invisible charged particles that shoot down to the ground before the visible lightning strike.

The NSSL adds that because this all happens so fast—in fact, in only about a millionth of a second—the human eye can’t possibly catch the entire thing, and we just perceive a lighting strike appearing, not zipping up or down.

But after watching that video, I would beg to differ. I’m not satisfied.

So I found Storm Highway, which offers a few very helpful animations to explain what’s going on. I would suggest that you check out their page.

Storm Highway clarifies that there are two types of lightning that strikes between the clouds and the ground: cloud-to-ground lightning and ground-to-cloud lightning. The latter strikes up, but the former does indeed move downward.

However, that’s not the full story.

What you see below is downward-moving cloud-to-ground lightning, which is the typical forked lightning you’re familiar with:

As near as I can gather, the bright forks of lightning you see heading downwards are simply negatively charged particles that produce some visible light. (And when I say some, I mean compared to the illumination that’s about to come.)

You might notice if you watch a thunderstorm that the forks of lightning you see in the initial few microseconds are considerably dimmer than the flash you’re about to see.

Once the wire is in place, it’s simply a matter of generating energy—the current zips upwards in a tremendous flow, and it flashes brilliantly a few times.

Watch videos of lightning with this in mind and you can just begin to see it, because you know what you’re looking for. And though the lightning clearly forks downward, you can definitely see a surge of electricity rush up the path of the bolt when it flashes.

But let’s not forget ground-to-cloud lightning…

Here, you’re seeing an entirely different and less often recognized type of lightning. It originates from a source on the ground and strikes upward into the sky.

You can clearly recognize ground-to-cloud lightning by the direction in which it forks: it’s obvious these bolts originate from the ground towers, and fork up into the sky.

Interestingly enough, there are actually two types of ground-to-cloud lightning. These are very creatively dubbed “Type A” and “Type B.”

Alright…so I can’t blame them for coming up with a dull but fairly simple name. If the hat fits…

Anyway. The forked lightning you see above is Type A lightning, and is less common than the less spectacular Type B.

In a Type A bolt, numerous forks of lightning are sent up into the sky like messengers…but only one will remain for the return stroke, which we see as the brilliant flash. (Yes, the NSSL was apparently correct…just less than clear in its delivery.)

A Type B bolt is a bit different.

If I judged the frequency of a Type B bolt by how easily it is to find in a Google image search, I’d think they’re much rarer than they are. I guess they’re just less spectacular, and less likely to be posted online with all the other cool lightning shots.

In the case of Type B, the lightning bolt only sends out one messenger—it doesn’t bother with forks. So there aren’t any to eliminate when the return stroke zips back down to the ground. There was only one to begin with.

And by the way, yes, the return stroke does go down. The ground-to-cloud lightning is the reverse of the cloud-to-ground lightning in every way.

This also explains why tall objects that produced an upward-moving lightning strike are described as having been “hit;” they are indeed “hit” by the return stroke.

As you might expect, ground-to-cloud lightning is most commonly produced by man-made metallic structures like buildings and reception towers. But it can also occur entirely naturally—notably from Yellowstone National Park’s Pilot Peak. 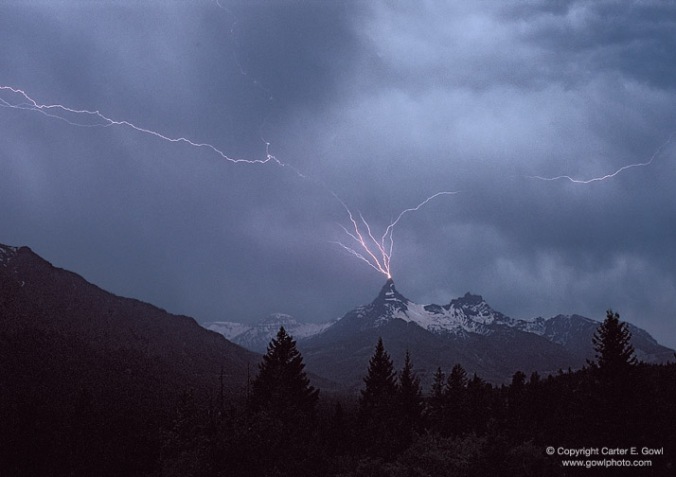 Take a good, long look, people, because this photo of lightning striking up from the tip of Pilot Peak may just be the only one in existence. Or, at least, the only one that’s published.

See, ground-to-cloud lightning does best when there’s a tall, pointy metallic structure at the ready. But the conditions found in such man-made structures can also, rarely, be found in nature. Notice the steep slope up to Pilot Peak, and how narrow and pointy it is?

Under the right weather conditions, that’s a recipe for a ground-to-cloud strike. Still, it’s unlikely to happen. According to the photographer, this photo was only caught with the aid of a special device called a “Lightning Trigger.”

I’m not going to go into detail about the ins and outs of extreme weather photography, but the basic idea is that the device actually detects lightning and automatically snaps a picture. Pretty cool, huh? I want one.

Anyway…that’s it on lightning for now. Maybe we’ll come back to it in future posts.

18 thoughts on “How Lightning Strikes”