Welcome to my third “Science Answers” post! About a month ago, I sent out a post requesting science questions from all of you; you can find it here. This post addresses the third of the questions I was asked. If you have a question, you can ask it in the comments here or on that post, or ask it in an email. Or find me on Facebook!

Q: What is the division between the physical and life sciences? For example, why do we think of rocks in a different category than we do plants and animals? (asked by Katherine)

Okay, wow. Another great question! This one is almost as fundamental as gravity, which I answered earlier.

Gravity may be pretty much the singular reason why the universe works the way it does, but the difference between the physical and life sciences is an important distinction when trying to understand the world around us.

So let’s start with what we know. When you hear “physical science,” what do you think of?

You might think of any number of things—but I’ll bet you that none of those things are alive in the traditional sense.

So, how about the biological sciences? What does that make you think of?

Whatever you think of, I’m going to guess they’re all alive.

But what makes something alive or not alive? What makes zebras leap and run, whereas rocks are forever immobile? What makes these living beings different from a vast galaxy or the Pillars of Creation?

The basic answer is the cell.

The easiest way to examine the divide between the physical and biological sciences is to look at each branch of science individually and examine the differences…and as we will see, the single, fundamental difference is the cell.

So what exactly is a cell? 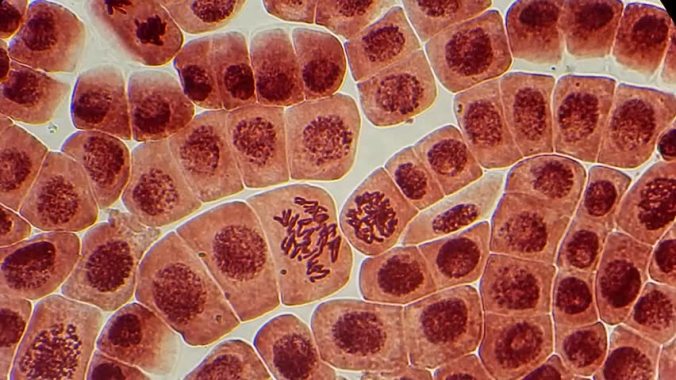 Well, it’s one of these little red things. The squarish, lopsided things with the darker red circle in the middle.

Actually, it’s also one of these things… 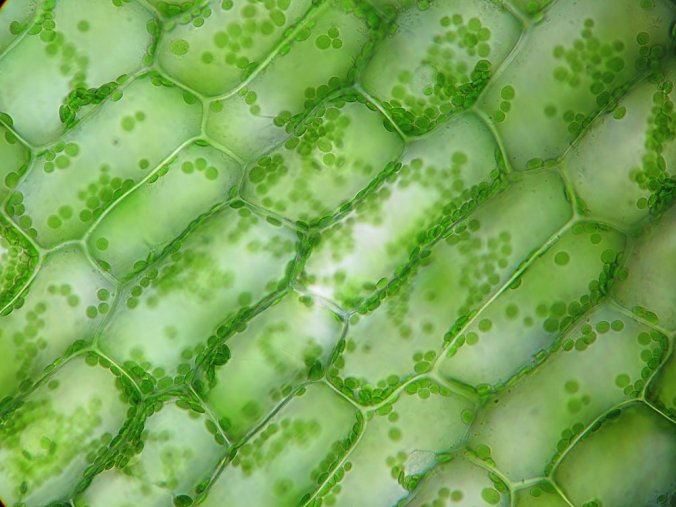 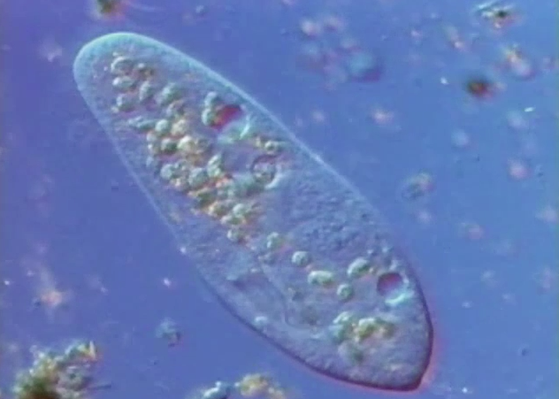 Any textbook will tell you that it’s the smallest unit of life. But what does that even mean?

A cell is officially classified as alive. A lot of cells of the same type attached together might form part of an organ called a tissue, which in turn functions along with other organs in an organ system, which in turn helps any human or animal function.

A cell is alive, so a tissue is technically alive, and so is an organ and an organ system. None of these things are intelligent, per se, and certainly not sapient. Even the animals they are part of aren’t all intelligent. But they are alive.

Go smaller than a cell, though, and you no longer have life.

Cells, like animals, have organs. But they’re mini-organs called organelles, and instead of being made up of cell-composed tissues, they’re made up of complex organic molecules. They’re not alive, and neither are the molecules that compose them.

Now, that’s not to say organelles aren’t organic. Like I said, they’re made up of organic molecules. Material doesn’t have to be alive to be organic, and to be the basis for forming life. But unless you have an entire cell, complete with organelles, you don’t have life.

You could have a dead cell, too. But it’s still the smallest unit of life, because if it were alive, then it would be, well, alive.

We’ve been doing a lot of talking about organic molecules. What are they? 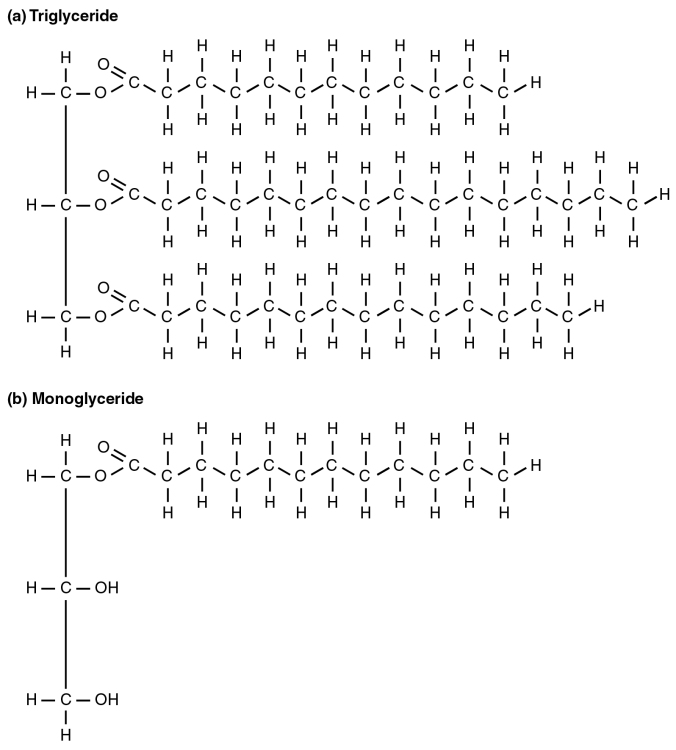 I know what you’re going to ask me. What’s up with all the letters?

How about we look at something a little bit simpler…such as a water molecule. 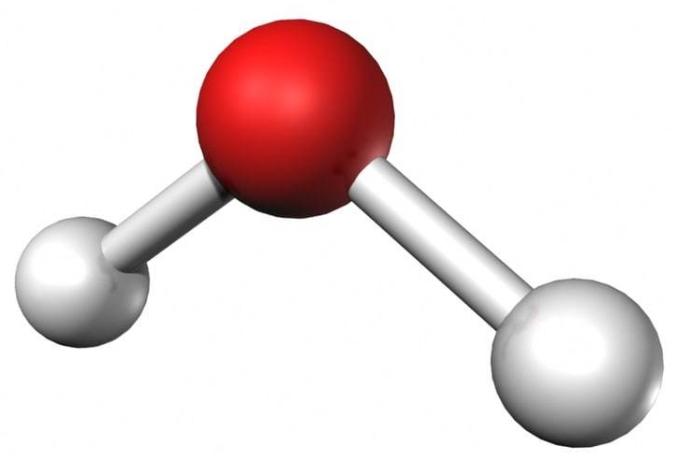 Water is two hydrogen atoms bonded to an oxygen atom. Atoms, by the way, are the building blocks of the universe. Everything is made of them, living or not. They’re often shown as balls attached together by sticks, but this is a very simplistic representation.

However, what’s more important is that water is often written as “H2O.” The “H” stands for hydrogen, and the “2” means there are two of them. The “O” stands for oxygen.

Notice that there are O’s and H’s in the triglyceride and monoglyceride I diagramed above?

That’s because a water molecule and a more complex organic molecule aren’t all that different. The more complex the molecule, the more rules there are for how it can look and behave, but that’s getting too far into chemistry—I’ll delve into that another time.

This is all well and good, but what exactly makes an organic molecule organic?

Well, the telltale feature is carbon, or “C.” The four elements that make up the basis for life are carbon, hydrogen, oxygen, and nitrogen, often remembered as CHON. But basically, when you see long chains of carbon atoms, it’s probably an organic molecule.

Why? Well…let’s actually just leave it at that for now. There will be plenty of time to talk about the strength of carbon’s resume for the life job in life science posts. In the meantime, let’s move on to the physical sciences.

Examine anything that has never been and will never be alive under a microscope, and you will notice one telltale difference from anything living. 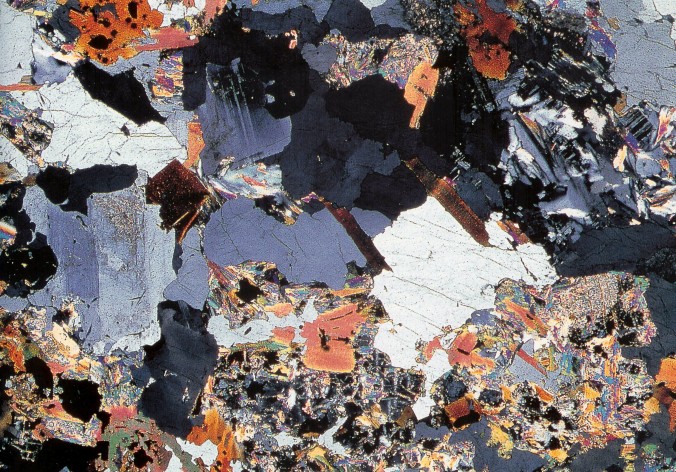 Here is a piece of granite—a type of rock—under a microscope. What do you notice?

Well, if you said it looks like some kind of abstract art piece, I agree with you. But more importantly, there are no cells.

Got that? No cells.

Now, that’s not to say there aren’t any organic molecules in this granite. In fact, there probably are. There are probably microscopic carbon chains packed within these layers of rock, so tiny even this microscope can’t see them.

So why isn’t this rock alive?

Because those carbon chains have not formed cells with organelles. They’re just lonely, solitary carbon chains waiting for something to break them out of their granite prison so that they can live up to their potential.

Minerals are not alive. The air we breathe is not alive. Water and ice and ammonia and all those other chemicals floating around out there are not alive, and all because no matter what kind of carbon chains they’ve got drifting about, they have no cells.

The universe is ever-changing. Galaxies drift and collide. Stars go supernova. Planets form. Mountains rise and fall, tides change, continents shift. But none of this movement indicates life—because there are no cells.

That’s not to say life doesn’t affect nonliving things. Plants are very much alive, and their roots are responsible for some erosion of rocks and stream beds and wherever else they manage to take hold. Human activity constantly shapes the environment. 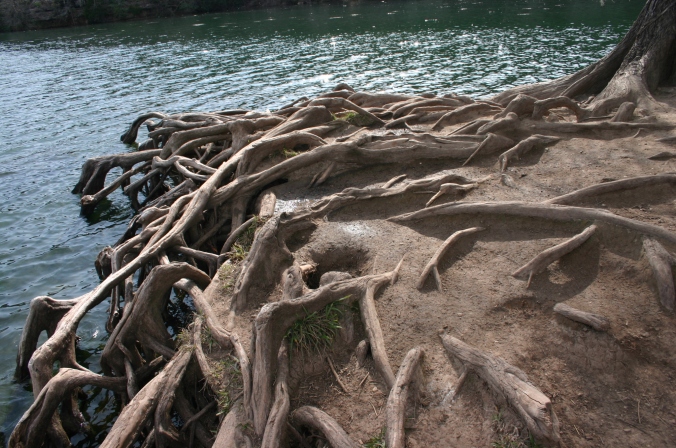 But the environment itself—the part of it that’s dirt or air or rocks or water, not the living parts—has no cells, and thus is not alive.

Sometimes you can find cells burrowing through dirt or floating in water…the cells are alive, but their environment is not.

Anyway, you get the picture. Cells are life. Without them, the world is beautiful and dynamic, but there would be no plants, no animals, no humans, not even a single-celled amoeba.

Thanks for the question, Katherine! I hope I answered it to your satisfaction—feel free to let me know if I’ve glossed over anything you wanted to know!