When you hear the word “weather,” you probably think of clouds and lightning bolts and rainstorms. Maybe, if you live in particularly high elevation or latitude, you think snowstorms or even blizzards.

We humans are used to these weather patterns. They’re the norm here on Earth. But would you be surprised to hear that the sun has weather of its own?

The sun doesn’t have clouds. Electricity doesn’t crackle through its atmosphere and build up as lightning. Its surface sits comfortably at about 5800 K, which is 9980°F and 5526°C—so it doesn’t even get close to cold enough for rain or snow.

So what kind of weather does the sun have?

It means that all weather on the sun has to do with its magnetic field.

Here’s an example of what I’m talking about…in the form of a prominence.

Tell me…do you think you recognize this loop of ionized gases?

You might have seen something like this before—they’re all over the news. And there’s a pretty good chance that when you did, it was referred to as a “solar flare.”

This is not a solar flare. In fact, a solar flare is something entirely different—something I’ll talk about later on in this post. A prominence is a loop of ionized gases that arches out of the photosphere.

So what the heck does this have to do with the magnetic field?

This is a diagram of a sunspot—a place where a loop of the sun’s magnetic field rises up through the photosphere and blocks heat flow from beneath. Does the shape of this magnetic field loop look familiar?

It should—you saw it a few seconds ago, in the form of a prominence.

What’s happening here is that the ionized gases in the sun’s corona—basically the solar atmosphere—get trapped within the magnetic field lines looping out from beneath the solar surface. And when that happens, we get a prominence.

You can easily see a prominence for yourself if you have a solar telescope, or just a solar filter to protect your ordinary telescope. 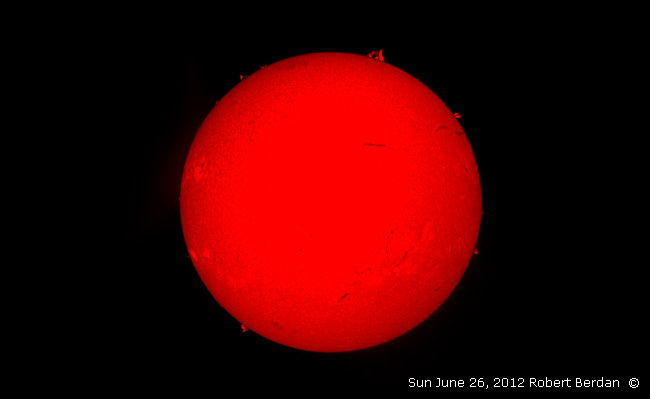 See those little spikes of activity along the limb (edge) of the sun’s disk? Those are the profiles of prominences.

And this brings me to my next question for you…surely prominences don’t just happen on the sun’s limb? I mean, how does the sun know which side of itself we tiny humans are seeing?

Well…we’re right. Prominences are not limited to the edge of the sun’s disc. They’re happening all over the solar surface, but they don’t look the same—because we can’t see a profile view.

We can, however, see where they block the light from the solar surface.

That’s right…those little dark squiggly lines you see all over the surface are prominences viewed from above. Except we have another name for them when they look like that—filaments.

Filaments on the sun are not to be confused with galactic filaments. That’s a word we use for an entirely different structure within the universe, one that’s made up of whole galaxies. We’ll get to that later on. 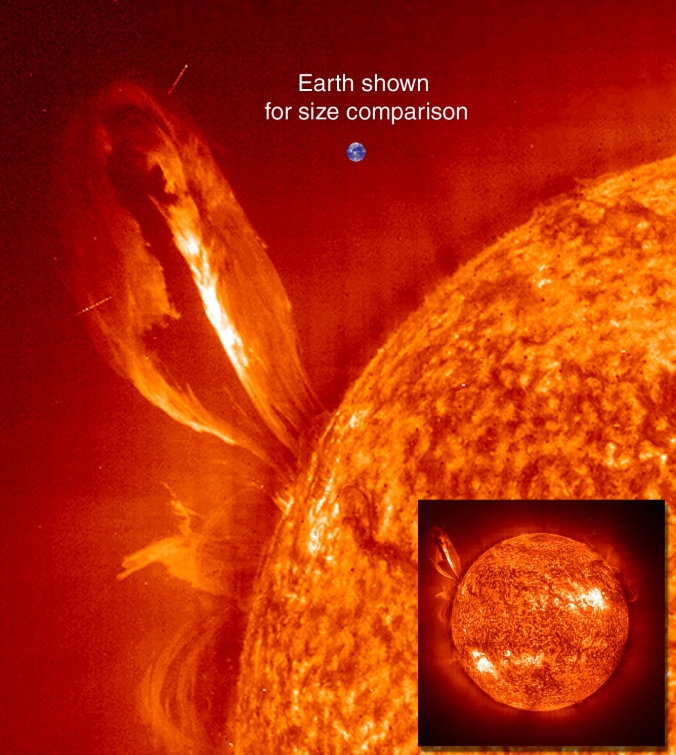 Uh…yeah. That little blue dot up there? That’s Earth.

You see prominences around the edge of the sun’s disk, and you don’t really think they’re that huge. I mean, the sun itself looks barely bigger than a penny through the eyepiece of a telescope.

Well, technically, just about everything in the universe falls under that description. But still. Prominences are worth their fair share of awe.

So…if these things people call “solar flares” for some reason are really prominences, what the heck are solar flares?

This is a solar flare. It’s that big, bright flare of activity towards the lower right of the sun’s disk.

But before I tell you more about solar flares, I want to show you something appalling about my Google image search for them.

From these search results, I’m forced to reach a saddening conclusion…many people are getting the wrong information about solar flares and prominences.

The majority of images here are prominences. Prominences are the loops that are quite prominent against the solar disk. Solar flares are present in a few of these images, but are not the main event—they’re the flare-ups of solar heat and light.

Solar flares are, however, related to prominences.

They have a north end, and a south end.

Let’s say two magnetic field loops were to collide. What would happen then?

Well, it depends. But if they were pointed in opposite directions, with two of the same pole pointed together and two of the other pole pointed outward…then they would cancel each other out.

However, it’s not quite so simple. See, you can’t just cancel out a magnetic charge. When these magnetic field loops meet, something called a reconnection happens.

That’s just a fancy word for a whole lot of energy being released. Enough to brighten the solar surface…in a solar flare.

On the news, you might sometimes hear that any one solar flare is expected to cause trouble on Earth.

And this time, it’s correct. Solar flares can interfere with radio communications, disrupt navigation systems, and even cause surges in electrical power lines. They also pose a risk to Earth’s satellites.

Never fear, though—none of these risks are catastrophic, and you’ve been living with the threat of solar flares hanging over your head your entire life. And I don’t think anything particularly disastrous has happened as a result, has it?

You may have heard of the solar wind, a stream of particles constantly flowing outward from the sun and lost to space. It’s responsible for a sight people travel across the world to see.

That’s right. The solar wind is responsible for the aurora borealis and aurora australis. (Yeah…we have a name for the southern lights, too. The South Pole can’t miss out on all the fun.)

The solar wind produced the aurora because of the way charged particles interact with Earth’s magnetic field. But will get to that in a future post.

The sun is a dynamic and dangerous place, and I would be surprised if solar flares were the most violent form of weather it had. And they’re not.

Remember what I was saying about what happens when two oppositely-facing magnetic field loops meet—a reconnection?

Well, sometimes the energy produced isn’t contained in a flare. Sometimes, we get a coronal mass ejection (or CME).

See that weird red disk in the bottom of the photo? That disk is just barely covering the sun’s disk.

Yeah. And that CME is easily the size of the sun’s disk.

This isn’t a prominence. It’s way too big for a prominence. And it’s not a flare—it’s way too massive for a flare. What’s happening here is a reconnection that’s releasing enough energy to blow large amounts of ionized gas out from the solar atmosphere.

Earth isn’t just getting a fair dose of heat and radiation from the sun. It’s getting charged solar particles—and lots of them.

And yes, you’ve most likely guessed correctly—this is definitely going to affect Earth. A CME can produce violent disturbances in our magnetic field.

But only if it reaches us.

That’s the good news—compared to the sun, Earth is a tiny grain of dust 93,000,000 miles away. The chances of a CME getting directed straight at us are low.

This is a coronal hole. It is literally a hole in the sun’s magnetic field.

So why call it a coronal hole? Because when the sun’s magnetic field opens up, it allows ionized gas in the corona—the outer atmosphere—to flow away as the solar wind.

I know what you’re thinking…coronal holes can’t possibly be a thing. Every image of the sun we ever see shows a pretty even distribution of light. The sun doesn’t get holes.

That’s because most images you see are of visible light, ultraviolet radiation, or basically any form of radiation besides x-rays. And x-rays will show you coronal holes.

Anyway…I think that’s enough on the sun for now. How about we dive into the stars we only see as distant pinpricks of light?