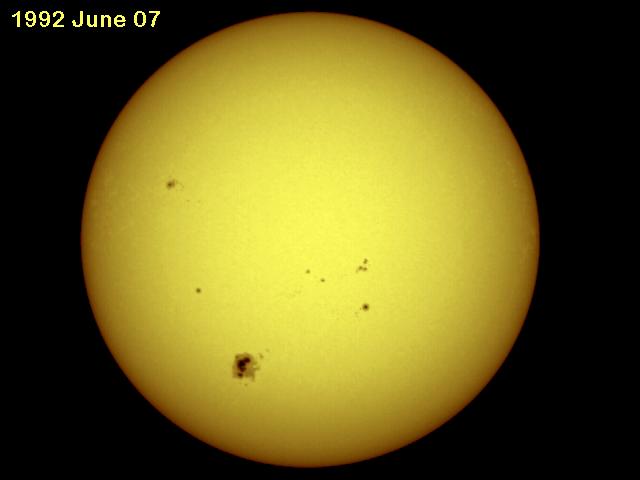 We can’t see below the surface of the sun.

That makes sense, really. We can’t see below the surface of the Earth, either—we have to get creative if we want to find out what goes on below the crust.

In the sun’s case, we can’t see below its photosphere because the gases within are so dense, light can’t escape. And we depend on light to see anything.

So…if we can’t see inside the sun, how do we study it?

The same way scientists can study the interior of the Earth—by using seismology.

Seismology is a sort of sub-science that studies the way vibrations from earthquakes travel. There are different kinds of vibrations, and they can tell us a lot about what the interior of the Earth is like.

Helioseismology, likewise, uses the vibrations of the sun’s surface to figure out what lies beneath.

The sun, as you know, is not a solid sphere. It’s a gaseous sphere, though it would be more accurate to call it a plasma—a fourth state of matter that’s even more energized than a gas.

If scientists can track the vibrations of earthquakes through solid rock, it’s no wonder they can track vibrations on the solar surface—plasma is a whole lot more mobile.

As it turns out, there are random convective currents within the interior of the sun. These currents don’t know how to keep to their own space—they’re constantly disturbing the gas of the photosphere, the sun’s visible surface.

These little disturbances manifest as vibrations. Oh, by the way, vibrations basically translate to sound.

That’s right. The sun makes literal noise. You couldn’t hear it, even if you could survive a trip to the sun, but a more sensitive ear might be able to make it out.

Humans may not be able to hear these vibrations, but we can find a way to detect them. See, vibrations don’t just mean something is making sound—they also mean that something is moving.

It’s not much. A low sound produces a low vibration. But we only need a little bit of up-and-down motion to see a Doppler shift.

By the way, if you missed my post on the Doppler effect, that basically means we can tell if something’s moving towards us or away from us by the light it emits.

The Doppler shift is a really handy way to measure motion, since it can detect really small shifts. And that’s what we need to detect vibrations in the solar surface. 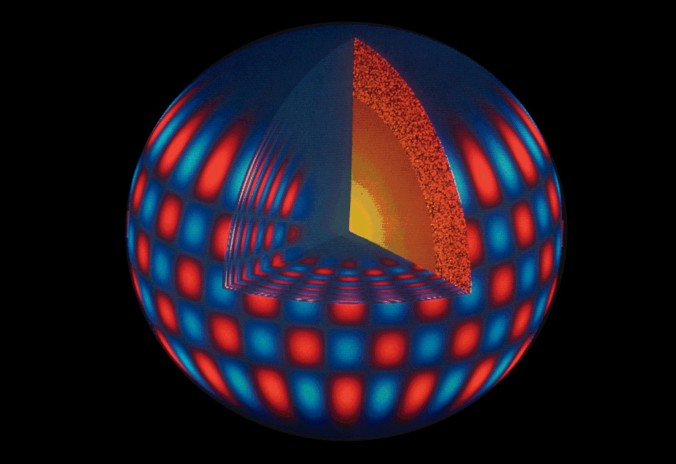 This is just one of many patterns we’ve seen the solar surface form.

Wait a second…what are we even looking at here? I mean, it doesn’t even look anything like the sun.

That’s because this isn’t an image of the solar surface. It’s a map of what regions of the surface are rising and which are sinking, based on the redshift or blueshift of the Doppler effect. Basically, if it’s blue it’s rising, and if it’s red it’s sinking.

From the Doppler effect, we can get a really good idea of how those surface vibrations are traveling within the sun…and we can diagram them.

Here, you see an image of the solar surface sliced open so the interior can be drawn in.

First, we map how the vibrations are traveling. Once we have a map of redshift and blueshift, we can figure out the wavelengths of these waves. And if you know the wavelength of a vibrational wave, you can learn a lot.

See, we know from the physics of waves that a longer wavelength is able to penetrate through denser material. A shorter wavelength will scatter if it hits dense gases it can’t get through.

By mapping how these waves travel through the interior of the sun, we can figure out where in the interior the gases are more or less dense. And we can get pretty specific—enough to map out where we’ll find the sun’s core and other layers.

From helioseismology, we can come up with diagrams like this.

And this diagram is just for show. It’s basically to scale, but it’s not exact. Astronomers can construct much more exact models from their observations of solar vibrations.

You might wonder how the heck astronomers figure out all that, just from a couple of waves. To better understand how this works, imagine a duck pond.

You’re standing at the edge of a duck pond, but for the sake of argument, you’re not allowed to actually look out at the ducks. You want to figure out where each duck is and how it’s moving, just by watching the ripples in the surface that reach the shore.

It may surprise you, but that’s totally possible.

Each duck contributes to the ripples in the pond, and the way the ripples form depend on the direction and speed of each duck. Theoretically, if you can map out as many of the ripples as you can, you can make a live model of that pond without ever seeing a duck.

The same technique works for the sun. All astronomers have to do is map out each one of those vibrations on the surface. Combined, they form a picture that tells us a lot more than just ripples in a pond.

In fact, they tell us a great deal more—from helioseismology, astronomers have been able to map the sun’s temperature, density, and rate of rotation. We can even map the sunspots that form on the back of the sun.

What are sunspots, you ask? Well, don’t worry—we’ll cover them in a few posts!

2 thoughts on “Our Sun: Helioseismology”