When we observe our sun’s corona, we discover something odd.

But…wait a second. How is that odd? Shouldn’t the sun be hot?

Well…yes. It should, and it is. Its surface temperature is almost ten thousand degrees Fahrenheit, and its core is many times hotter. But there’s a basic law of physics that says energy flows from hotter regions to cooler regions.

What’s up with that?

First, let’s get a better idea of what we’re talking about. What exactly is the corona?

In this diagram, you see the sun’s innards and surface labeled. That’s the core, radiative zone, convective zone, and photosphere. The chromosphere isn’t visible to our eyes even through a specialized solar telescope.

Beyond the chromosphere, labeled in the upper right corner of the diagram, is the corona. It’s a layer of extremely low-density gas that extends well beyond the solar “surface,” into space.

We call the photosphere the “surface” because it really is the visible surface of the sun. It’s the right density to emit a lot of light and also let that light escape, so it’s what we see. Anything below that is so dense the light gets trapped.

And anything above that isn’t dense enough to emit much light, and can’t be seen under normal conditions.

When I say normal conditions, I mean those rare times when you get to look through an astronomer’s solar telescope. But here’s an example of an abnormal condition.

Meet the corona, visible to the naked eye only during a total solar eclipse.

As I’ve explained before, a total solar eclipse happens when the moon’s orbit gets tilted just so, and the silhouette of the “new moon” crosses directly between the Earth and the sun. The sun’s brilliant photosphere is blocked, and we get to see our star’s atmosphere.

The little pink beads around the lunar limb (edge) are actually parts of the sun’s chromosphere. The corona is the angelic haze that extends out beyond that.

We don’t have to wait for a solar eclipse to see the corona, though. Not if you’re a professional astronomer.

It’s the sun. Except this astronomer wasn’t interested in seeing the sun’s surface, so he or she stuck what we call an occulting disk in front of the sun to block out its light.

The astronomer did this electronically. You won’t get very far from holding a coin or something in front of the sun and squinting. But the basic idea is, if you block out the photosphere, you can see the hazy filaments of light that make up the corona.

This isn’t a good way to study the chromosphere—the occulting disk blocks it out too. But the corona is a curious thing, and it’s worth a bit of study.

Why? Like I mentioned before, it’s hot. Really hot.

Too hot to make sense when the chromosphere, the layer below, is actually a bit cooler, and energy is supposed to flow outward from the sun’s interior. A phenomenon on the photosphere that we call limb darkening proves it.

Here’s the secret. The sun has a really, really wild magnetic field.

Have you ever placed a magnet in a tray of iron filaments?

If you try it, you’ll see those iron filaments move before your eyes—to form a pattern something like this. What’s happening is they’re moving to follow the magnet’s invisible magnetic field lines, as shown in this diagram.

In fact, all it takes to make a magnetic field in a cosmic object is a molten outer core that’s rotating at a slightly different speed from the inner core. It’s called differential rotation, and we’ll talk about it a lot later.

The sun also rotates differentially, though not in quite the same way as the Earth. And yes, we’ll talk about that later too. For now, here’s a representation of the sun’s magnetic field.

So…what does the sun’s magnetic field have to do with the temperature of the corona?

Imagine that heat from below can ride that solar roller coaster. It can ride those magnetic field loops right up into the corona. And here’s the crux—it’s easier to heat up a gas if it’s not very dense.

The corona is a perfect low-density gas for heat currents from below to heat up.

That’s why the corona is so weirdly hot. It doesn’t produce its own heat, and maybe if it were a bit denser, it would follow the sun’s pattern of having hotter gases in the center and cooler gases farther out.

But it’s so low-density—even less dense than the chromosphere, and so low-density it takes special astronomical equipment to study it—that it’s really easy to heat it up. And it’s got heat coasters rolling through it constantly.

This makes the corona so hot that it has consequences for the rest of the solar system…in the form of the solar wind. 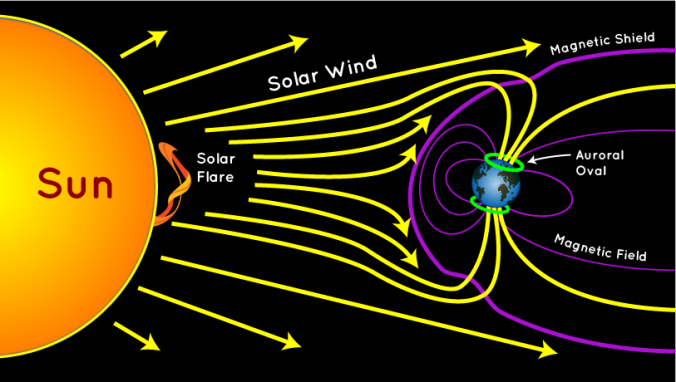 And this, my friends, is how the northern lights are born.

No, I’m not kidding you. That’s literally how they form.

The solar wind is made up of ionized gases that blast outward from the corona and travel through the solar system. Planets like Mars that don’t have a magnetic field don’t stand a chance—their atmospheres are blown away.

Earth, on the other hand, does have a magnetic field. It’s not as impressive as the sun’s, but it serves its purpose. It protects us from the worst of the solar wind, but it doesn’t take care of all those charged particles.

The ones that remain interact with gases in the atmosphere at the poles, and we are treated to the aurora.

Of course, you’re probably going to wonder why northerners don’t see the aurora borealis all the time, if it’s caused by something as constant as the sun. That’s because the sun is less constant than you think. Well…at least the solar wind is.

The solar wind varies a bit. Sometimes it hits us harder than usual. Sometimes we get an incredible light show, and sometimes it doesn’t happen at all. It all depends on the activity going on in the sun’s atmosphere.

Next up, why don’t we take a closer look at what goes on below the surface of the sun?

One thought on “Our Sun: The Corona”