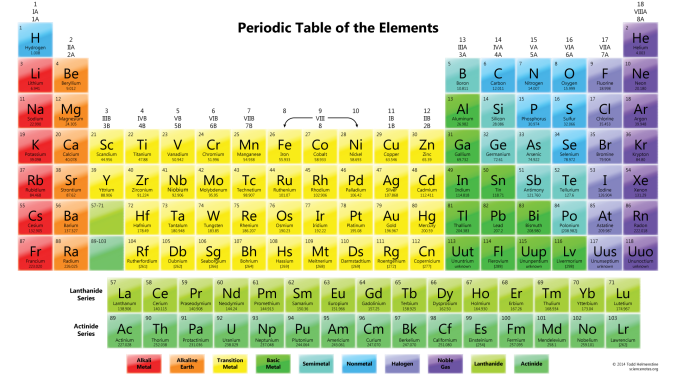 Does this look familiar?

It might, or it might not. If it does, you might recognize it as the periodic table of the elements—more often known as simply the “periodic table.” It’s an ingenious way to organize elements that has worked for scientists for quite some time.

To fully appreciate the ingenuity of the periodic table, I’d have to take you through a few chemistry lessons. Never fear, I have every intention of doing so—later. For now, though, I just want to address enough of the world of atoms to talk about stellar spectra.

That just means the spectrums we get from stars, by the way. (Spectra is plural for spectrum.) And that means…well…we’ll talk about it later. Let’s talk about the different types of atoms first.

Atoms are the building blocks of the universe. Which means there must be different types. But what are they?

First of all, take a look at that periodic table up above. Every one of those colored boxes represents a different type of atom. So far, over one hundred have been discovered.

How do only one hundred atoms make up the whole universe?

Well, it’s kind of like the alphabet. English has only 26 letters, and yet those letters are all we need to put a whole language together. A language that’s really complex and hard to understand if you’re not dedicated.

So…what makes atoms different from one another?

Well, let’s take a look at hydrogen, oxygen, carbon, and nitrogen, the four most common elements in the solar system.

What do you notice about these guys?

A carbon atom has 6 protons and (often) 6 neutrons. Those 6 protons can hold onto 6 electrons since they have opposite electric charges. The number of neutrons doesn’t matter as much.

What happens when we add a proton to a carbon atom?

Well, now we have 7 protons, so we have a nitrogen nucleus (the central hub made of protons and neutrons). Now we can hold onto 7 electrons, too. 7 protons and 7 electrons make a neutral nitrogen atom—the charges balance out.

Add another proton to our nitrogen atom and we can attract an eighth electron, giving us an oxygen atom. And hydrogen is the simplest of all—just a single electron orbiting a single proton.

So…where do the neutrons fit into all this?

They’re in charge of isotopes.

Here are three isotopes of carbon: carbon-12, carbon-13, and carbon-14. These are all carbon atoms. Notice how each one has 6 protons and 6 electrons? We would have to add or subtract a proton to get a different element.

Both carbon-12 and carbon-13 are stable isotopes. Carbon-14, however, decays over time, and it’s used for something called radioactive dating (which has nothing to do with people dating one another). We’ll talk about that another time.

Any element can have different isotopes. Hydrogen is a special case.

Hydrogen is the only element of the periodic table that normally has no neutrons at all. It’s a single electron orbiting a single proton. But if you add a neutron, it becomes twice its weight—and it becomes deuterium.

Deuterium is important to the study of Venus’s atmosphere, among other things.

Squeeze another neutron into hydrogen’s nucleus and you get tritium, an even heavier isotope. Tritium is important in nuclear weapons.

Notice something important: because neutrons have no electric charge, they don’t attract electrons. So if we add a neutron to a nucleus, we don’t add any more electrons. Only the protons tell you the electron count of an atom.

But atoms don’t always have the same number of protons and electrons.

For reasons that are beyond the scope of this post, sodium wants to lose an electron, and chlorine wants to gain an electron. So sodium will hand an electron over to chlorine, and everyone’s happy.

Well, I say happy, but these two really can’t settle for a simple electron hand-off. So they end up in an ionic bond, where they’re sort of latched together. And thus they become a new substance—NaCl, commonly known as salt.

Anyway, the point here is that a chemist can easily split these two up.

But when that happens, chlorine hangs onto its extra electron, and sodium doesn’t want that electron back. So neither has the right amount of electrons to cancel out the charge from the protons, and they become ions.

This isn’t the only kind of bond between atoms. Sometimes, instead of forming an ionic bond, atoms will form a molecule.

You’ve met H2O before. It’s all over the planet. In fact, you’re made mostly of water. You need it to survive. But did you have any idea what it’s made up of?

A water molecule is two hydrogen atoms and an oxygen atom, joined in what we call a covalent bond. That’s…well…that’s really a discussion for a chemistry post. For now, just know that the atoms here don’t give up or accept electrons.

Yeah. These guys actually know how to get along. Chlorine steals sodium’s electrons. Hydrogen and oxygen share. Sharing is caring, right?

So why does it matter whether a bond is ionic or covalent? Well…there are a lot of reasons. But none that have anything to do with astronomy. I’ll talk about them later on.

However, I’ll bet you’re dying to know more about these mysterious electrons. They’re the key to all chemical reactions, meaning without them, we wouldn’t have so many types of materials—we’d just have the 100+ elements of the periodic table.

So electrons have got to be important, right?

Well, they are—even to astronomy. And that’s why I’m going to spend my next post talking about them.