As I covered in my last post, radio astronomy deals with the longest wavelengths of the electromagnetic spectrum (a spectrum that includes visible light). Radio waves are not sound waves. They’re radiation just like visible light, infrared, and ultraviolet.

I’ll prove to you that radio waves can’t be sound waves. We get them from space—that’s why there’s such a thing as radio astronomy. But there’s no sound in space. Why? Sound requires something to pass through, and space is a vacuum.

Why? Because just about everything in the sky emits electromagnetic radiation.

Everything except black holes and a couple other things…but those are topics for another day.

But electromagnetic radiation isn’t easy to collect. And radio waves are especially hard.

One thing you should realize about electromagnetic radiation is that there are no boundaries between the different types. We label them gamma rays, x-rays, ultraviolet rays, visible light, infrared rays, microwaves, and radio waves, but those are just names.

In reality, there’s a slow, gradual blend from one type of radiation to the next. The only difference between each one is its wavelength. 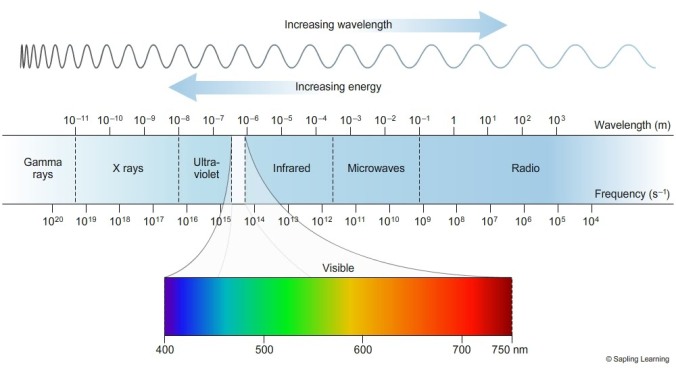 Right now, we’re going to look specifically at radio waves. These include UHF, VHF, FM, and AM frequencies. (Frequency is a measure of how many wavelengths pass you by in a certain amount of time—think of it as shorter wavelength = higher frequency.)

Anyway, the problem with any kind of Earth-based astronomy is that radiation has a bad habit of interacting with the atmosphere.

Technically, I suppose that’s a good habit. There’s a lot of reasons to be thankful for that, which I’ll probably cover later on. But for astronomers, it’s a huge inconvenience. Because the atmosphere blocks a lot of radiation before it even reaches us.

So just how much electromagnetic radiation gets blocked?

Well, suffice to say…most of it.

Think of the brown regions as the atmosphere. The blue is the radiation. If the blue reaches the bottom of the graph, then it’s reached Earth’s surface.

There’s a little tiny window that lets visible light through. That’s the colors of the rainbow. Radio waves, as you can see, have a much larger window—but only half of them get through.

It’s unfortunate. It’s a quirk of radio astronomy, and as long as we live on a planet, astronomers just have to suck it up and deal with it.

Radio waves have a hard time getting through the atmosphere strictly because they’re radio waves. A radio wave has a certain wavelength and carries a certain amount of energy. An amount that’s really, really small.

Radio waves carry the least energy of any wave on the electromagnetic spectrum.

The problem with that? They don’t have the energy to put up a fight when the atmosphere holds up a stop sign. They kind of just quit without trying.

Oh well. We can’t fault radio waves for being what they are. We just have to do our best to capture them.

Another major consequence of a radio wave’s wavelength is bad resolution.

This isn’t a radio image, but it shows what happens when resolution is bad. Those concentric rings around the image are called the diffraction fringe, and no telescope—radio or not—can make out any detail smaller than it.

Remember how I said that radio waves are the longest wavelength we’ve got to work with?

They produce the biggest diffraction fringes of any type of electromagnetic radiation. Which means they’re the worst when it comes to making out small details.

That’s why interferometry is so common in radio astronomy, more common than it is in visible astronomy. An interferometer is a collection of telescopes connected by a computer, designed to fool the radiation into thinking it came from one big telescope.

The advantage is that the resolution becomes that of a much larger telescope even than all the little ones combined. And that shrinks the diffraction fringe.

And then, of course, there’s one last handicap of of radio telescopes…and it’s similar to light pollution in visible astronomy. 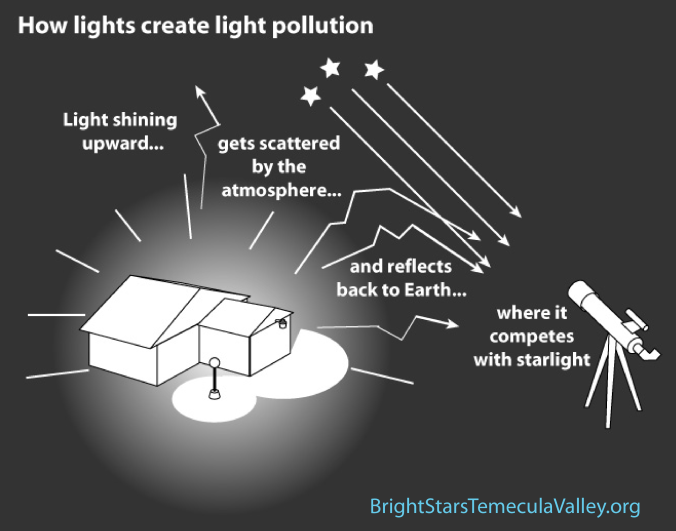 Light pollution is what happens when artificial lighting from civilization gets mixed in with light from the stars. It sort of drowns out the starlight and decreases how much detail astronomers can see.

Radio astronomy suffers from the same problem, except it’s called interference. Unfortunately, since radio waves are already weak in energy, interference is a huge handicap.

And it’s widespread. It comes from everything from poorly-designed transmitters in Earth satellites to automobiles with faulty ignition systems.

But the same goes for light pollution—people are asked not to use white lights near telescopes, and are encouraged to use low-pressure sodium bulbs. And that doesn’t stop a lot of people from using white lights and other bulbs.

That means that even the wavelengths of radio waves reserved for radio astronomy are sometimes contaminated by radio noise. Astronomers try to solve this problem by building their radio telescopes away from civilization.

It’s the same story as with visible light astronomy—most telescopes are constructed far from the effects of light pollution, which basically means away from major cities.

You’d think, with all of radio astronomy’s weaknesses, astronomers just wouldn’t bother. But there are plenty of advantages, and I’ll cover those next up.