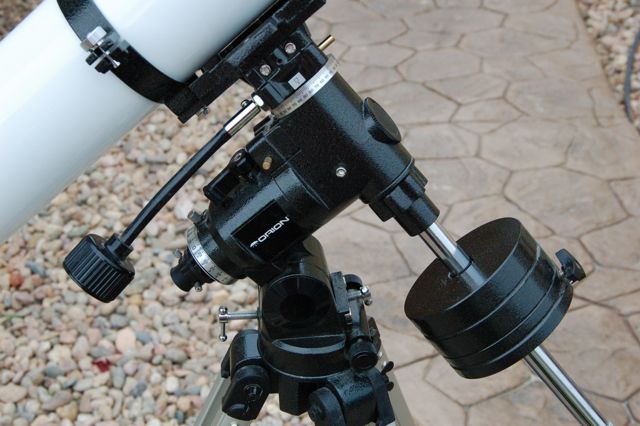 So, any idea what this handy-dandy thing is?

Okay, so maybe I sort of gave it away in the post title…

I know what you’re about to say next. Why are we looking at a mount? What’s so special about a mount—isn’t the telescope itself more important?

And the fact is…I know where you’re going with that. The telescope is important, and without it, the mount would have no purpose. But without the mount, the telescope would be lost—it would have power, but nothing to do.

A telescope has three basic powers that make it so good at its job. It gathers light, it resolves as much detail on an object as possible, and it magnifies.

These functions are useless if the telescope can’t find an object to point at in the sky.

That’s what a mount does. Its job isn’t just to support the telescope. That’s for the tripod to do. The mount—depending on what type it is—uses different strategies to keep track of the motions in the sky, and make sure the telescope knows what to look at.

And there are two basic types of mounting systems… 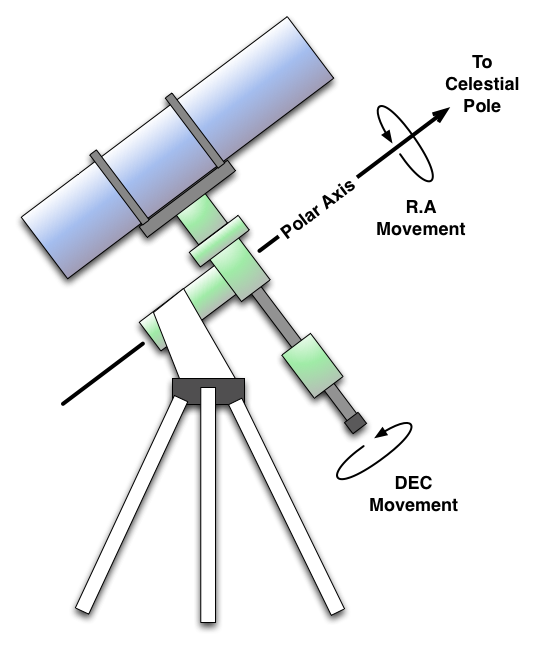 The first, my personal favorite, is the equatorial system.

This system is about as simple as you can possibly get. My first telescope, a starter 5-inch refractor, uses an equatorial mount. These mounts are a bit older and more traditional, but they’re perfect for manual drives.

Manual drives? What the heck does that mean?

Equatorial mounts are by far the best for manual telescopes, because they track the sky simply and efficiently. 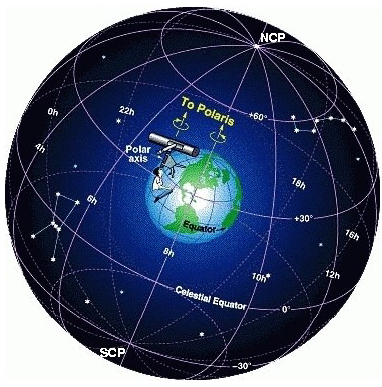 First let’s recap a little about the celestial sphere.

This is just a model of what we can see in the sky, not a representation of how the universe actually works. It makes the most sense if you imagine yourself as standing inside the celestial sphere, not looking down upon it from outside.

Every twenty-four hours (ish), the heavens rotate around you. All motion is centered around the north star, known as Polaris. This point on the celestial sphere is called the North Celestial Pole (labeled here as NCP).

The heavens appear to rotate around you because Earth is rotating in the opposite direction inside the heavens. But that doesn’t matter for this post.

Right now, just realize that all the stars move around the north pole in the same way. That means that if we can come up with a mounting system that will move in that same way, it’ll move with the stars.

The equatorial mount is this system.

See, equatorial mounts are designed so that they are tilted at the same angle as the Earth’s poles, relative to your horizon. Meaning, wherever you find the north star in the sky, your mount will aim right at it.

And because the telescope sits parallel to the mount, your telescope’s default position when you set it up will be basically aimed at the north star.

You can change your mount’s angle. It’ll come in the store set at a certain angle, and all you have to do is set it up so it’s right for your latitude.

When you aim your telescope at a faraway object, your mount’s declination axis will always stay the same. You’ll only need to turn the mount around its right ascension axis so that the telescope follows the object in a circle around the north star.

(Those axes are labeled above, by the way.)

Equatorial mounts are definitely the simplest to use…but if you prefer the gentle touch of technology, then alt-azimuth mounts may be right for you. 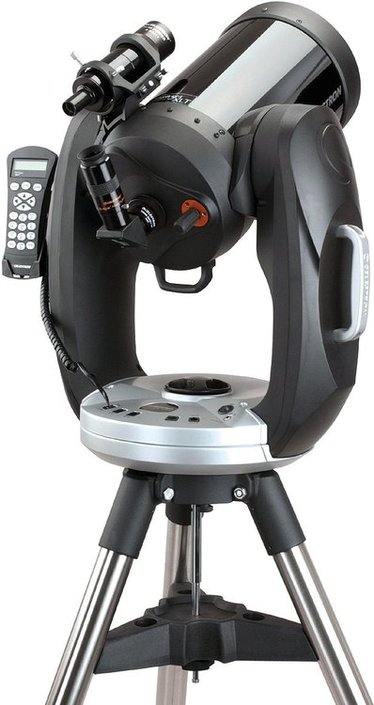 I told you we’d talk about its mounting system in my post on different kinds of reflecting telescopes. This one is a Schmidt-Cassegrain, which basically just means it uses mirrors (rather than lenses) and has the eyepiece on the lower end, not the side.

Anyway, what kind of telescope this is really doesn’t matter. Because alt-az mounts (an abbreviation for alt-azimuth) can really be used for anything.

That’s the genius of it.

The only problem with the alt-az is that it really needs a computer system if you want to get serious. Since it’s not aligned to the north star, its motion isn’t the same as the stars. It needs a little extra attention—yours, or a computer’s—to stay aimed at the right thing.

So how does an alt-az work, anyway?

The alt-az sits flat on the tripod and can move in two directions. It can rotate around, your basic lid-unscrewing motion. And it can rotate up and down, kind of like nodding your head.

These two motions mean that it can aim anywhere in the sky.

Computers can make this system work really well…if you know the exact alt-az coordinate of an object in the sky, a computer can drive your mount for you so it’s always aimed in the right alt-az direction.

We divide the celestial sphere up into coordinates.

They’re a lot like latitude and longitude lines, except…not. Your azimuth line is degrees east of the point on the horizon where the sun rises on the vernal equinox, and your altitude line is degrees from the celestial equator.

Honestly…it’s not important to get all that straight unless you want your own alt-az mount. But here’s a diagram, just in case you’re curious. 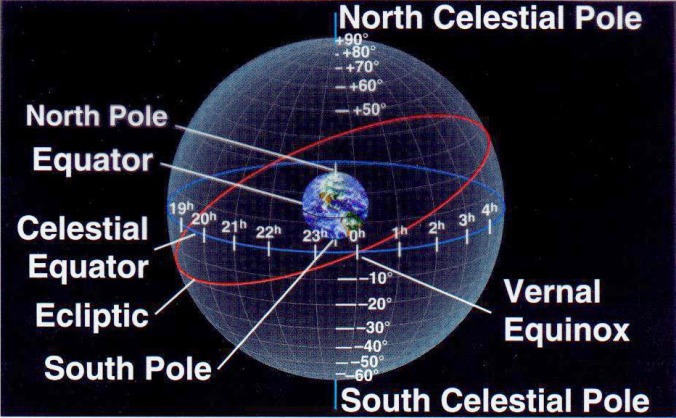 See how there are numbers running eastward of the vernal equinox, which is labeled as “zero”? The “h” stands for hours, but it’s not used for time here. Basically, if you draw lines from the Earth’s core to any one of those “hour” marks, we’re measuring the angle formed.

In any case…your options with an alt-az aren’t as limited as you might think. They make equatorial wedges for them these days. You screw the wedge to your tripod, attach your alt-az mount to the wedge, and now your alt-az mount is aimed at the north star.

What does that do? It turns your alt-az mount into an equatorial mount! So you can have all the ease of a modern mounting system, but be able to follow the stars around the sky without a hitch.

If you ask me, the plain old equatorial mount is still my favorite…but I’d be lying if I said I didn’t have a soft spot for the good ol’ alt-az. After all, my Schmidt-Cassegrain is on an alt-az, and I can’t help but love it.

Tomorrow I’m going to cover a bit more about improved telescope systems, and then I might take a step back and talk about telescope parts—or we’ll dive straight into interferometry.