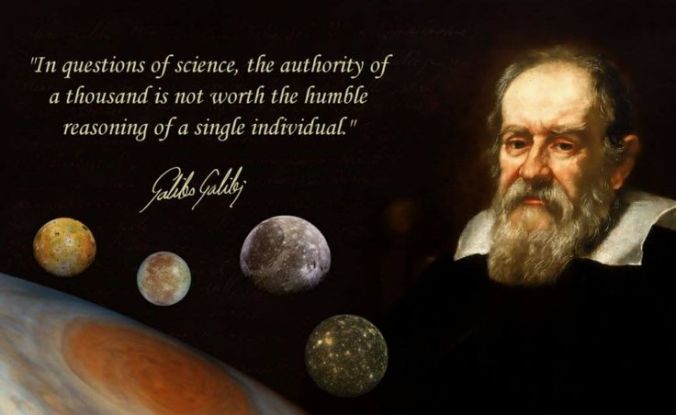 When you hear the name “Galileo Galilei,” what immediately comes to mind?

If you thought, “inventor of the telescope,” you’re not alone. I also wouldn’t be surprised if you thought “condemned by the Inquisition for believing the Earth orbited the sun.”

But neither of these are true. If you’ve been following my more recent astronomy posts, you probably realize why—in Galileo’s time, people already knew that the Earth moved around the sun.

The idea that he invented the telescope is more understandable…but, again, it’s not true.

So what is true about Galileo, and how did he contribute to our understanding of astronomy?

The myth that Galileo invented the telescope comes from the fact that it was how he made his observations, and he was the first astronomer to use a telescope to try to answer the leading question of the day: what was Earth’s place in the universe?

At this time, the Copernican hypothesis that the sun was the center of the universe was very popular.

The Church, the highest authority at the time, didn’t resist it. It wasn’t all that unbelievable that the light in the sky that determines day and night would have a central location in the universe.

Well, take a look at the sun for yourself. Wait, no don’t—please don’t! Galileo may have made some fantastic observations about sunspots, but he actually went blind because of it!

Here is one drawing Galileo made of the surface of the sun that he saw through his telescope.

So…what exactly are we seeing here? 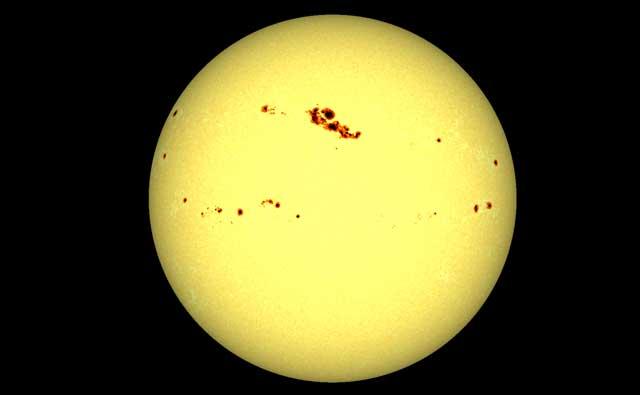 The Church could believe that the sun was the center of everything because it really did seem godlike. And you wouldn’t believe how many indigenous cultures have mythology surrounding the sun as a deity—or perhaps you would believe it.

Because the sun was a very spiritual figure in the sky, and the astronomy the time had held until very recently that beyond the chaotic Earth was a realm of perfection, the idea that the sun had spots was monstrous.

But that wasn’t all Galileo observed.

Galileo recognized that sunspots actually migrated over the sun’s surface, as shown here. This is Galileo’s drawing of a single sunspot moving (and changing a little) over the sun’s disk. He decided that the sun must rotate on its axis, just like the Earth.

And what do you know—that’s actually true.

But the Church didn’t like it. The idea that the sun, a place of heavenly perfection and the center of all things, could move, was heretical.

Unfortunately for Galileo, it wasn’t even the last of his discoveries of the universe’s imperfection.

Here is one of Galileo’s drawings of the moon’s imperfection. Through his telescope, he observed mountains and craters where people had previously just seen shades of dark and light. At the time, no one had any idea why the moon had the shapes it did.

But with Galileo’s telescopic observations, he realized that the moon has geographical features just like the Earth. And Earth’s mountains and valleys had long been viewed as a sign of its imperfection, relative to the perfection of the heavens.

For the moon, not too long ago held to be the beginning of the heavenly realm of perfection, to be a planetary body just like the Earth, was heretical.

But Galileo’s observations didn’t stop there… 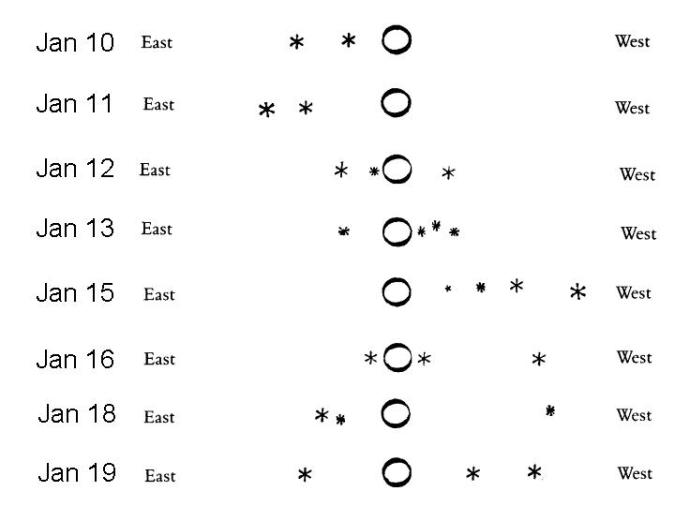 Here, Galileo has drawn the positions of Jupiter and its moons on eight different nights. What was especially revolutionary about this observation was that Jupiter even had moons.

Before Galileo pointed his telescope at Jupiter, no one had ever seen Jupiter’s moons. They’re simply too small and dim for the naked eye. Galileo might have been tempted to call them stars, but for the way they clearly orbited the planet.

Wait a second, what? Objects in the universe can orbit things besides the Earth and the sun?

The Copernican hypothesis, that the planets all orbited the sun, was widely accepted and Kepler’s discovery of the elliptical orbit just about cemented it. The moon’s place in orbit around the Earth had been proposed back in Aristotle’s time and had never been challenged.

But the idea that little miniature planets could orbit another one of the planets—Earth wasn’t considered a planet yet—was ridiculous.

Galileo would make yet one more observation, though this one didn’t get him in trouble with the Church.

Galileo noticed when he observed Venus through his telescope that it went through a full series of phases.

Now, the Copernican hypothesis might have been popular, but it had yet to become the way everyone agreed the universe worked. This observation was a nail in the coffin of the Ptolemaic model—one model that suggests that Earth is the center of the universe.

In the Ptolemaic model, all the planets—including the sun—orbit around the Earth. To explain the way they sort of appear to go backwards in the sky every once in a while, the astronomer Ptolemy developed the epicycle.

As for why the planets go backwards…they don’t. And Copernicus explained why it looks like they do.

If the Ptolemaic model was right, Venus should have stayed a crescent all the time, as the left part of the diagram above shows. But since it goes through a full cycle of phases, the Copernican hypothesis was more likely true.

It’s amazing how quickly this single observation swept away any thought that the Earth was the universe’s center. If anyone had been able to look at Venus through a telescope earlier on, perhaps the Copernican hypothesis would have gained ground much faster. 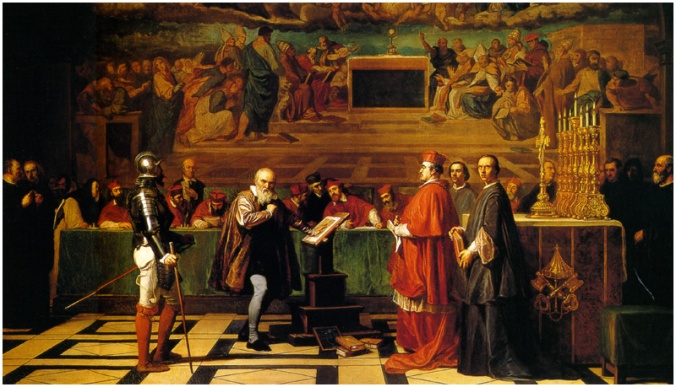 The storm of controversy that enveloped Galileo was more because of the imperfections his observed in the moon and the sun than because of his support of the Copernican hypothesis.

If science had been more established at the time, perhaps people would have had more sympathy for Galileo. After all, all it would take to prove he wasn’t lying or directly disrespecting the Church was one look through his telescope.

But unfortunately for Galileo…many of his enemies claimed that his telescope itself was an instrument of Satan, and that anything he saw through it was the work of the devil.

It didn’t make his ordeal with the Church go over any better.

Galileo was formally forgiven much later. But regardless of his treatment at the time, his memory lives on as one of the founders of modern science. Without Galileo, science as we know it today might never have become popular.

And without Galileo, Isaac Newton certainly wouldn’t have gotten the impetus he needed to figure out gravity…