Thales and Pythagoras suggested that the natural world could be understood. Aristotle dared to imagine what was beyond the Earth. Plato encouraged thought about the universe, even if he did take astronomy one step forward and two steps backward.

Copernicus followed in Ptolemy’s wake, devising the revolutionary heliocentric (sun-centric) model of the universe. Tycho Brahe may have (incorrectly) rejected that model, but he did make some of the most detailed night sky observations yet.

What’s more, by Johannes Kepler’s time, Tycho had cast doubt on the idea of uniform circular motion that had plagued astronomy for centuries.

At last, the world was ready for a more mathematical take on a question that had confounded philosophers, mathematicians, and classical astronomers alike: how do the planets truly move through space?

By standing on the shoulders of giants, Johannes Kepler was finally able to devise his three laws of planetary motion, which are still the leading mathematical theory today.

The one idea that had perhaps the longest lasting impact on astronomy—and was the most detrimental to classical astronomers’ understanding of the universe—was uniform circular motion.

It’s the idea that everything in the cosmos revolves around the center of the universe in perfect circles at constant speeds, never speeding up or slowing down or even changing direction.

This idea was pretty popular when astronomers of the time took a somewhat spiritual approach to astronomy, believing Earth to be a center of chaos and the heavens to be a place of perfection.

The fact is, this idea couldn’t have been further from the truth. Not only was the universe as we know it born out of chaos, but the planets don’t orbit in circular paths, and they don’t even stay at the same speeds.

Kepler defined the shape of a planet’s orbit as an ellipse. 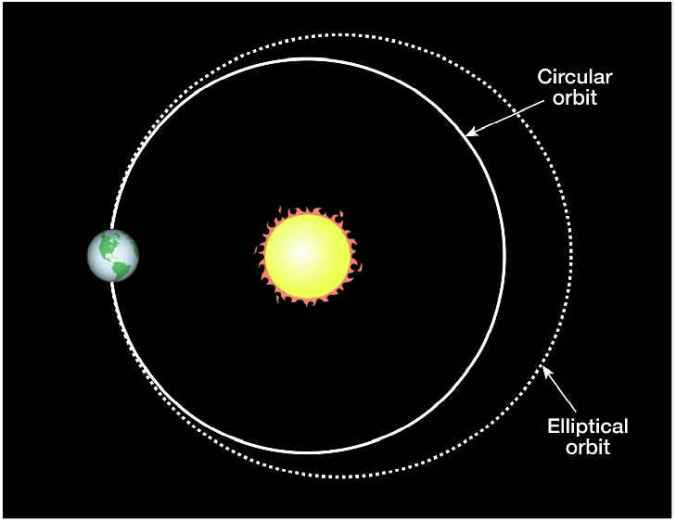 You can see here how astronomers in the past managed to get planetary orbits so wrong. There doesn’t look like there’s much of a difference between the Earth’s real orbit—the elliptical one—and the circular orbit Copernicus thought it had, does there?

Well, as you can also probably see from this diagram, Copernicus had the orbital shape off by enough that his model couldn’t predict planetary motion well. Similar-looking or not, those orbits are off by a couple centimeters just on this screen.

Imagine how far off Copernicus was when you think of Earth’s 585.6 million mile orbit?

Regardless…that ellipse looks a whole lot like a circle, even to me. So how is it different from what astronomers like Copernicus, Ptolemy, and Aristotle had insisted upon?

The answer lies in eccentricity. 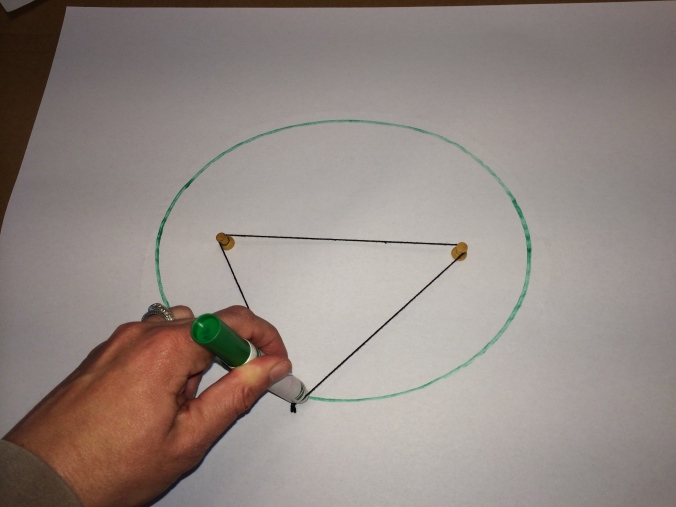 The ellipse drawn above has a high eccentricity. That just means how far apart the pushpins are.

Well, it turns out the pushpins are just a representation for what we call the foci of a planet’s orbit. And if you could take an enormously long string and pull it taut across the two foci as you move a giant space pencil around, you’d draw a planet’s orbit.

That brings us to Kepler’s first law of planetary motion…that the orbits of the planets are ellipses with the sun at one focus (singular for foci).

Wait a second…the sun is at a focus?

That’s right. Here’s an exaggerated diagram of a planet’s orbit. In truth, orbits are rarely this elliptical—even Mercury, with the most eccentric orbit of all eight planets, has an orbit that’s almost completely circular.

But you get the picture. In this diagram, both the sun and a focus are foci of the planet’s orbit. Notice that there’s nothing at the other focus.

The question of what makes a planet move in this way—if not a ginormous length of cosmic string—baffled Kepler, and he tried to explain it. But we wouldn’t get that explanation until Newton came along, with his brilliant idea of gravity.

At this point, it was just about inconceivable that any two objects could exert a force on each other without actually touching. Yet, that’s exactly what the sun and every other planet of the solar system does.

The only reason astronomers of the time accepted Kepler’s elliptical orbits was because for the first time, observations of planetary motion in the sky lined up with the model being proposed.

Eccentricity describes the shape of a planet’s orbit. But how do we describe how fast it moves?

Again, Kepler had a revolutionary idea in the form of his second law of planetary motion—that a line from a planet to the sun sweeps over equal areas in equal intervals of time.

Okay…what does that even mean? 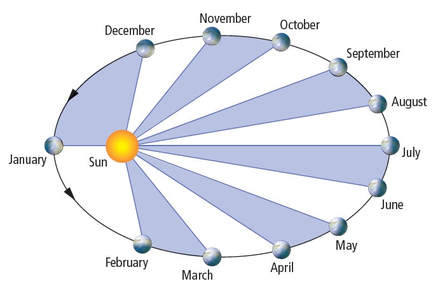 Well, think of it this way. Notice that this diagram shows a planet at the beginning of each month in its orbit. That means the time between each position is the same. There, we’ve got the “equal intervals of time” part down.

We’ve also got the “line from the planet to the sun” part. There’s a line like that drawn for each month.

So what about the “sweeping over equal areas” part?

Well…here’s the magic of Kepler’s second law. Each one of those distorted pizza-shaped areas—both the shaded ones and the white ones—have exactly the same area.

That’s right. Each one of them covers equal amounts of space. And that’s because, for example, in January and February, the line between the planet and the sun for each month is exceptionally short, but the planet moves faster then, covering a larger distance.

And in the summer months, the line between the planet and the sun is much longer, but the planet moves more slowly. So we’ve got big, long lines sweeping over areas, but the areas are still the same because the planet doesn’t cover that much distance.

How Kepler figured this out from observing the planets in the sky, I’ll never know. He was renowned as a mathematician, and I can see why. What he did is like figuring out the shape of a building when you’re stuck in one room.

Kepler was grounded to the Earth, but somehow managed to see planetary orbits as if he were actually looking down on them from outer space.

Kepler’s third law is a bit more…shall we say…mathy. So I’m not going to spend a huge amount of time on it. But it basically says that a planet’s orbital period squared is proportional to its average distance from the sun cubed.

Okay, if nothing else, just take the following away from that third law: how fast a planet orbits the sun is related to how far it is from the sun, on average.

And that’s all you need to worry about there.

If you really want an equation for it, though, here you go:

For reference, P is the orbital period and a is the planet’s semimajor axis in AUs.

If you want to dive deep into science, you do need an understanding of math. There’s no way around it. But you don’t need one for this blog, because my whole point is not to scare you away from science. So I’ll leave you not with an equation, but with a question…

Ellipses explain planetary orbits. But why? What makes a planet not go perfectly round?