Imagine that you’re living sometime around 2000 BCE, give or take a thousand years or so. That’s about 4000 years before our time.

You look up at the sky at night, and see it filled with numerous points of light. Some of them stay mostly fixed, but move mysteriously in circles around the north pole. Others move with the rest, but wander a bit from time to time.

And then there’s the sun, whose brilliant rays light the day. The moon, like the sun, doesn’t seem to follow the path of the lights in the sky. It even changes its shape, and sometimes disappears entirely.

Wouldn’t you wonder if there was some pattern to these otherworldly motions? Wouldn’t you devote time to studying them and seeing if you could predict them?

That’s what has motivated astronomy for over four thousand years.

Before it was considered a science, it was a philosophy. And before that, it was as close to religion as you can get. Astronomy was the practice of tracking the heavens and trying to understand the world.

Before science, trying to understand the world motivated religion. Most religions—or all, I’m hardly an expert—have some notion of how the world was created, and astronomy began as just another way to divine some supernatural meaning from the stars.

There’s a whole field of study devoted to how ancient cultures viewed the stars, and it’s called archaeoastronomy.

You can see how much these ancient cultures valued and looked toward the heavens by how much physical effort they devoted to tracking them. Indeed, there are some rather large monuments that seem to have astronomical alignments.

One of these is Stonehenge, located on Salisbury Plain in southern England and built in stages from about 3000-1800 BCE. 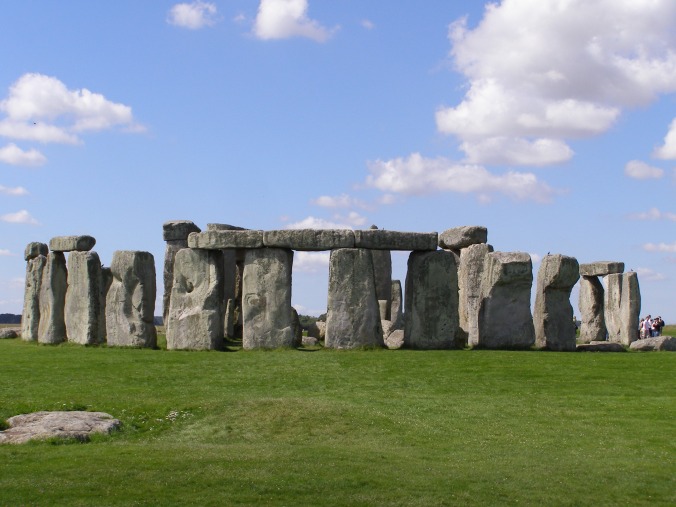 True, no one actually knows why Stonehenge was built. It’s really quite mysterious. I’m amazed that pre-industrial human beings managed to heft and arrange these rocks in the first place.

But they did, and no writings from their culture—if, indeed, they had a written language—survive to this day.

The image above is the most familiar view of Stonehenge. But would you be surprised if I told you it doesn’t look quite like that from all sides?

Unfortunately, a lot of Stonehenge’s rocks have been disturbed over the years. In fact, half or more of them have strayed from their original positions.

To me, this is hardly surprising. I find it amazing that any of these rocks are still standing. Do you notice they’re tipped right on end? And most of them have to support a third, skinny rock on top of them, too!

That’s a lot of balance. I can only imagine the work that went into engineering this.

If these people put so much work into Stonehenge, what was it for? What did it mean to them?

We’ll never know for sure, but we have found out that Stonehenge’s rocks seem to mark certain positions the moon and sun can be found in the sky. Whether or not this is purposeful remains a mystery. 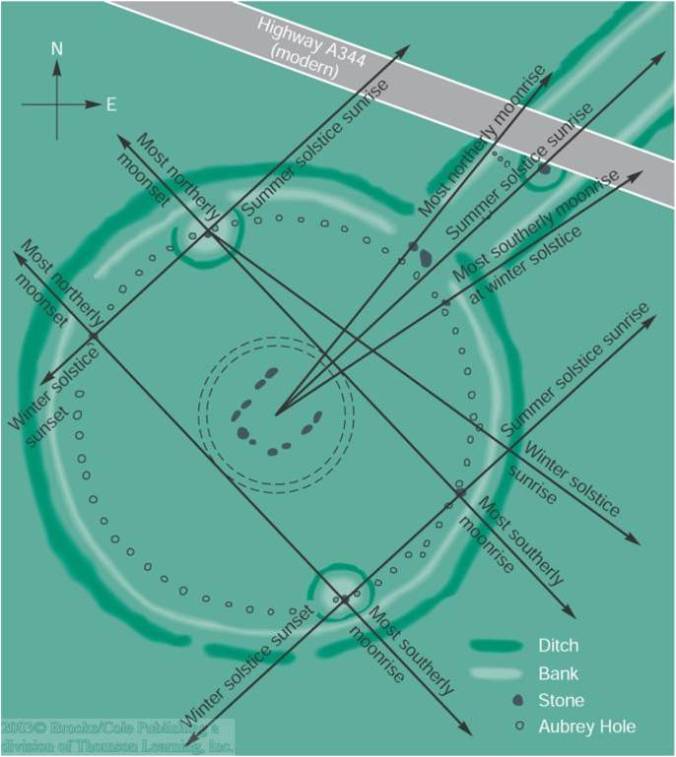 In fact, those famous stones found in so many pictures are only a fraction of Stonehenge’s true size. 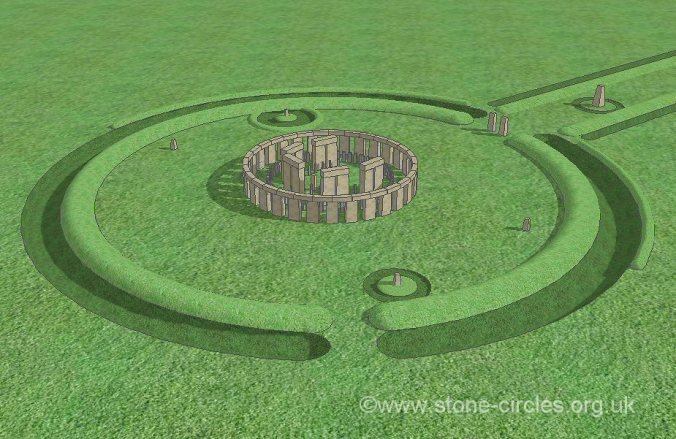 Here’s how we think Stonehenge used to look.

It had a ring of stones surrounding a horseshoe-shaped arrangement of larger stones in the center. There was an “altar” stone at the very center, and surrounding this arrangement was a raised bank. Just outside the bank was a ditch.

And extending off to the northeast was a long avenue, lined with similar banks and ditches. Standing within the avenue is what we call the Heelstone, and from the altar stone in the center, it marks the rise of the sun on the summer solstice.

You’d be surprised how big this whole arrangement is.

Stonehenge has a diameter the length of a football field. Imagine how much walking, planning, organizing, and sheer labor it took to make this dream a reality. I’m banking on the alignments of the rocks as purposeful.

Stonehenge is far from the only ancient structure aligned with the sky.

There’s also Newgrange, the Temple of Isis, and Fajada Butte in Chaco Canyon. And these are just a few examples—there are numerous places around the world home to interesting astronomical alignments. 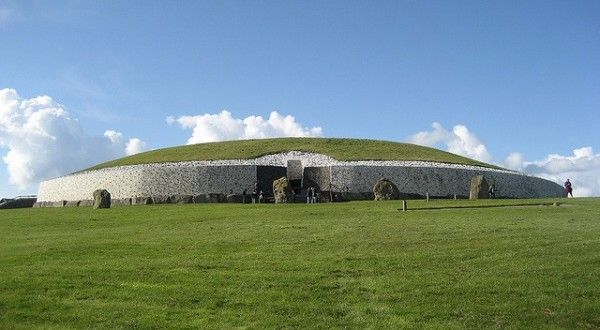 Newgrange, for example, was built around 3200 BCE in Ireland. It’s theoretically a tomb—but this hypothesis is cast in doubt. More obvious is the way its main passageway is aligned up with the winter solstice sunrise. 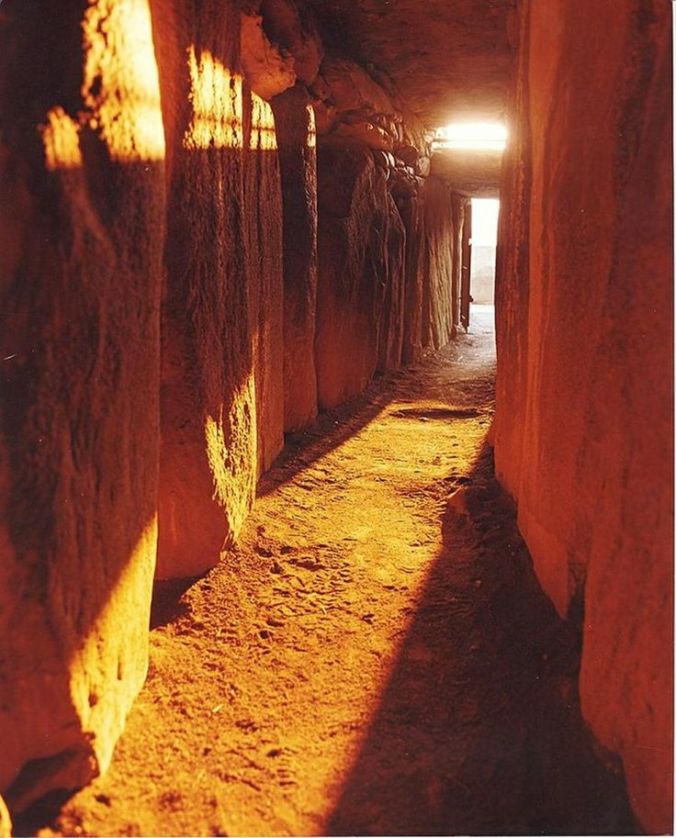 Then there’s the Temple of Isis. It’s in Dendera, Egypt and was built about 2000 years ago. As with many such ancient sites, its connection to astronomy isn’t certain. But it is built to line up with Sirius as it rises.

That’s the brightest star in the sky. If that doesn’t indicate an interest in the heavens, I don’t know what does.

One of my favorite ancient astronomical sites is Fajada Butte in Chaco Canyon, New Mexico. Here’s one for my American readers to visit! Unfortunately, ever since visitor traffic started eroding the rock here, the butte itself has been off limits to the public.

High up on Fajada Butte, three slivers of rock lean against the rock face. And on the rock face, we can see a spiral carved into the stone. During certain times of the year, the sun shines between the three leaning rocks and casts these light “daggers”… 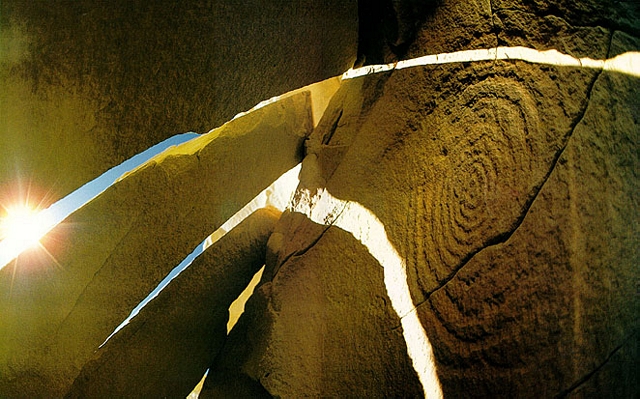 If you’re interested, here’s some perspective on where these slivers of rock are. It looks to me like they’re leaning against the base of the rock at the top of the dirt and gravel that slopes up to it.

How the people who did this managed to carve such a near-perfect spiral into a rock face, I’ll never know. But it certainly lends credence to the idea that they did this to track the sun’s position in the sky.

The light daggers, depending on the time of year, even track the solstices and equinoxes.

Here’s a diagram showing how the light daggers are cast during the different times of the year. On the summer solstice, the sun rises much higher in the sky than usual, and a single dagger is cast straight down the center of the spiral.

On the autumnal and vernal (spring) equinoxes, the dagger falls slightly to the side of the center of the spiral

And on the winter solstice, when the sun is as high as it gets, it’s low enough that it shines in between both cracks in the slivers of rock. Two daggers are cast, falling perfectly to either side of the spiral.

There are many other examples of archaeoastronomy, and maybe sometime I’ll share some of them with you. But for now, it’s time to move on to the ancient Greeks’ contribution to astronomy.