We see them all the time. When we look up at the moon in the sky, we’re bound to notice that it looks just a little bit different from the last time we saw it. It changes from a slivery crescent to a full circle, and then wanes back to the crescent phase again.

The moon has behaved the same way in the sky for billions of years, ever since a Mars-sized space rock collided with the newborn Earth and the debris collected into our own personal satellite.

For that long, the moon has watched over us and captivated scientists and amateur skywatchers alike.

But what are the secrets behind its monthly changes?

I suppose the first thing you should understand is the moon’s orbit.

The moon takes one month to make a full orbit around us. In fact, the word “month” is taken from “moon”—hence the “Moonth Chronicles” post series I once wrote. (You can still find those posts online, just not on this blog.)

Notice a few things about the moon’s orbit. First, it’s not a perfect circle—like all orbits in the solar system (and, as far as we know, in the universe), it’s an ellipse. I’ll talk more about elliptical orbits in a later post.

Second, notice that the bright half of the moon in this diagram is the illuminated half—the side that’s in the daytime. Daytime and nighttime on the moon works the same way it does on Earth. The side facing the sun is in daytime, and vice versa.

The only difference is that the lunar nights and days are two weeks long.

Why two weeks? Think about it. Just as a full Earth rotation is 24 hours, one day and one night, a full lunar rotation is a month—four weeks. So half that is going to be a day.

Well…here’s the cool thing. You know how Earth takes a year to orbit the sun but just a day to rotate? Well, the moon rotates and revolves—orbits—at the same time. Meaning, its rotation and its revolution are exactly the same length.

Now you might ask, “What do you mean the moon rotates? I always see the same craters in the sky. It keeps the same face toward us, right?”

Right. But that’s because it rotates. Here’s why.

As you can see in the diagram above, the moon rotates to keep the same face toward Earth at all times. The illustrator drew an oversized lunar lander to represent the side that’s always facing Earth.

What if the moon didn’t rotate? Well, something like this would happen…

As you can see here, the moon is no longer rotating. The lunar lander stays in the same spot on the surface…but the face of the moon that we can see changes.

And that’s certainly not the case. If you look up in the sky at any given time in the month and see the moon, it will look a bit different—the phases will change from crescent to full and back to crescent again—but you will always see the same face, the same craters.

The time the moon takes to orbit (and rotate) is called its sidereal period. Don’t worry, that’s just a fancy astronomy term to separate its orbital period from its phases.

So…why separate them in the first place?

Well, believe it or not, the lunar phases actually don’t line up with the sidereal period. The phase cycle is called the synodic period, and it’s just 2.21 days longer than its sidereal period. I’ll show you why, but first let’s take a look at why the phases happen.

Remember earlier, how we said that half of the moon is always in daylight?

Well, that’s always going to be the side facing the sun. The phase we see depends entirely on how much of the daylight side is visible from Earth, as you’ll notice in the diagram below.

Keep in mind that phase 1 here is actually the new moon, but it’s depicted as the last slivery bit of the crescent phase. The new moon is what we call it when the moon is no longer visible in the sky.

Here’s the secret, though. It’s still there, and if it was giving off any light, we could find it along the ecliptic—the imaginary path that all the planets trace across the sky. It’s just that the side of the moon facing us is experiencing nighttime.

Also note that while there isn’t a “dark side” or a “light side” of the moon—all parts of the moon experience daytime and nighttime—there is a “near side” and a “far side.” You have no doubt noticed this, since you see the same craters on the moon all the time.

In general, think of the moon not as a bright disk in the sky, but as a spherical object. It’ll help you see the phases as fractions of the daylight side, rather than just changes in the moon’s shape.

Notice that full moon happens when the moon is opposite the sun, and the Earth is between the moon and the sun. That’s the only time when we can see the entire daylight side of the moon.

So, why again is the synodic period (the phase cycle) longer than the sidereal period (the moon’s orbit)?

In this diagram, we see the Earth’s orbit around the sun in blue. The moon’s orbit is shown in white. Two of the moon’s orbits are drawn in, each representing the moon’s position in space as the Earth changes places along its orbit.

Now that you know that full moon happens when it’s on the other side of the Earth from the sun, you can see how this diagram makes sense. The empty circle on the moon’s second orbit represents where it is one full sidereal (orbital) cycle after “full moon 1.”

But it’s not at full moon again yet, because it isn’t directly opposite the sun.

Then, 2.21 days later, the moon finally reaches its “full” phase and completes a synodic cycle.

Here’s what’s happening in the sky, on the daytime side of Earth…

Here, the sun and moon both follow the ecliptic, the path every object in the solar system follows across the sky. If we could see the stars during the day, we’d see the sun right near Scorpius, and the new moon would appear near it. 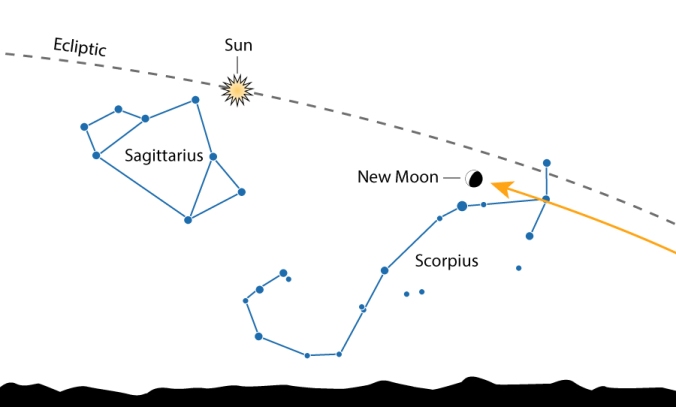 One sidereal period later, the moon reappears in the same place in the sky—but the Earth has moved along in its orbit, so the sun has moved along the ecliptic. The moon hasn’t quite reached the New Moon phase again yet…

You won’t be able to see this, since it will be happening on Earth’s daytime side and the sun’s brilliant light will drown out the constellations. Because only the far side of the moon is experiencing daylight, you won’t see the moon, either.

But there are times when you can see the new moon…and I’ll talk about that in a post coming up soon!